Showing posts from March, 2021
Show all

As if the World were not Evil and Sick Enough, Now We have Satan Sneakers with Human Blood in the Soles! All 666 Specialty Sneakers Sold Out.

American Church Membership Falls Below 50% for first time in Gallup polling. Decrease in "Catholic" Attendance is Double the Decrease in Protestant Attendance. Most of Hispanics "Unchurched."

"Fatima Faces" Close ups of Sr. Lucy and the Imposter.

The Original Video of the Last Visit of Sister Lucia to Fatima In 1946. This is from the Fatima Shrine itself. Does this Look or Seem like the Woman who was with JPII?

Dr. Chojnowski Deals with Another Turkey!

Rome is in Apostasy! Why are we still "confused" 34 years later?

"Identity Thieves" Destroying the Message and Messenger of Fatima!

"A Stolen Persona" -This was a Crime, No Matter Which Way You Cut It.

Lest We Forget that the Church of the Apostle Peter is a Desecrated Temple, Francis Orders that All Visible "Masses" Conform to the Neo-Modernist Liturgical Decrees of Vatican II. Just Like We "Must" Accept the Doctrinal Decrees of Vatican II in order to Be "Catholic." This is Another Opportunity to Separate Yourself From the Abomination. Just Do It!

https://onepeterfive.com/sister-lucia-final-confrontation-between-the-lord-and-satan-will-be-over-family-and-marriage/ Rorate Caeli  has released a translation of a  remarkable interview , originally published in 2008, with Cardinal Carlo Caffarra of Bologna. In it, he references correspondence he had with Sister Lucia, the principal visionary of Our Lady at Fatima:  Q. There is a prophecy by Sister Lucia dos Santos, of Fatima, which concerns “the final battle between the Lord and the kingdom of Satan”. The battlefield is the family. Life and the family. We know that you were given charge by John Paul II to plan and establish the Pontifical Institute for the Studies on Marriage and the Family. >Yes, I was. At the start of this work entrusted to me by the Servant of God John Paul II, I wrote to Sister Lucia of Fatima through her Bishop as I couldn’t do so directly. Unexplainably however, since I didn’t expect an answer, seeing that I had only asked for prayers, I received a very lo
3 comments
Read more

A Lenten Appeal to Cardinal Bertone from Sister Lucy Truth. 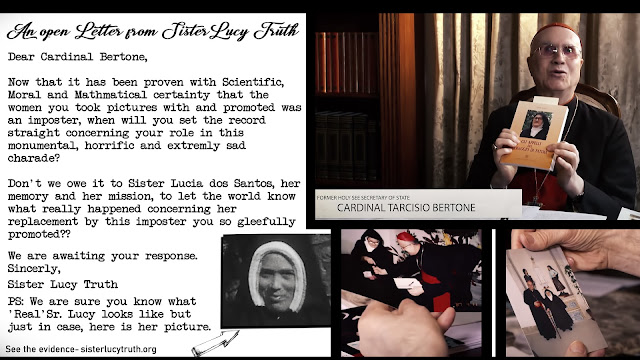 How can I choose The Fatima Center over the Pope? ------ If We Overlook the Bizarre Nature of the Question Itself, if this is not a Statement that the Gates of Hell have Overcome the Rock of Peter then What Would Such a Statement be Like? So I Guess We Must Wait for a Non-Catholic Pope to Consecrate Russia so that it will become Catholic, correct?

If the Truth about the Replacement of Sister Lucy of Fatima had a Money Trough Attached, Would the Fatima Industry and the World Acknowledge It?

https://www.cathinfo.com/crisis-in-the-church/more-on-sister-lucy-of-fatima/msg737704/?topicseen#msg737704   Tradman Jr. Member Posts: 198 Reputation: +108/-86 Gender:  Re: More on Sister Lucy of Fatima «  Reply #5 on:  March 12, 2021, 09:14:30 AM » 2 0 Quote from: Tallinn Trad on March 12, 2021, 02:49:22 AM Looks to me like the same person after dental work.  I fail to see how the Church finds a close match to her looks and convinces her to take on a false ID and live in a cloister for the rest of her life?  Imagine a card game. Only those are allowed to play who can see no difference in the two Lucys in the various photos on the cards. All the players have to do is correctly separate the photos of the two Lucys. James Martin SJ would have to pay winners $10,000 in cash but only to those who can separate all the cards correctly. Every single person who initially saw no difference in the two Lucys, would suddenly see the differences, and win the game. Y'all just need a little mot
3 comments
Read more

When does multi-million dollar Fatima, Inc. cease to be invincibly ignorant and become complicit in the substitution of an imposter for the real Sister Lucy of Fatima? They are now profiting off of the words and stolen persona presented by the Imposter and her Vatican handlers. The evidence is clear to 8 years olds. See, sisterlucytruth.org 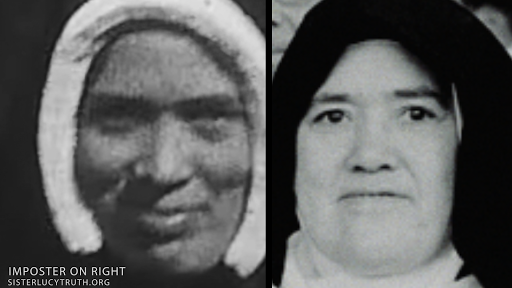 These are some of the clearest, cleanest, and most focused pictures comparing Sister Lucy I and the Imposter, Sister Lucy II (post-1959). I don't think that the Fatima Industry can any longer be morally innocent of the imposture due to invincible ignorance, not after sisterlucytruth.org
2 comments
Read more

"Bloody H*LL!"  Before he reads, A Scientific Explanation of the Fatima Miracle , let us mention briefly what he himself said about Fatima and our dear Sister Lucy in his "International Bestseller" The God Delusion , pp. 116-117, back in 2006: "Constructing models is something the human brain is very good at. When we are asleep it is called dreaming; when we are awake we call it imagination or when it is exceptionally vivid, hallucination.  As Chapter 10 will show, children who have 'imaginary friends' sometimes see them clearly, exactly as if they were real. If we are gullible, we don't recognize hallucination or lucid dreaming for what it is and we claim to have seen or heard a ghost or an angel or God; or --- especially if we happen to be young, female, and Catholic -- the Virgin Mary. Such visions and manifestations are certainly not good grounds for believing that ghosts or ange
2 comments
Read more

Astrophysicist of 57 years, in a book soon to be published, Proves that the Miracle of Fatima is a Scientifically Verifiable and Unprecedented Event Whose Miraculous Character was Wonderously Proven By Its Being Predicted 3 Months Prior to the Miracle, which took place EXACTLY at the Time Predicted.

Here is the text of Sister Lucy Truth tweets that I put up this morning:  Sister Lucy Truth @SisterLucyTruth · 12h Scientific Proof for the Miracle of the Sun. In a text, yet to be published, a physicist of 57 years and a full professor at two universities, demonstrates that the Miracle of the Sun, which occurred on October 13, 1917 is an unprecedented scientifically verifiable FACT. The book was written over the course of a year and was inspired by an article, entitled "The Miracle of the Sun" written by Dr. Peter Chojnowski, which was itself based upon a lecture given in both Rome and Brazil. The astrophysicist is a self-described "former Catholic." The scientist indicated to me yesterday that the Miracle of the Sun is a scientifically unprecedented event, which was not in any way a matter of mass suggestion or based upon any type of purely subjective psychological experience. Unknowingly, and to the physicist's retrospective surprise, his book was completed
7 comments
Read more

One More Gallican Statement that the Church is Defective and that a Roman Pontiff can continually and throughout the course his reign teach heresy and worship pagan idols. Sorry, but if such is the situation, how can you say that the Gates of Hell have not Prevailed? Francis has made these scholars totally reject the Papacy as the Rock upon which Christ built His Church. Listen, WE ARE NOT THE TEACHING CHURCH, LEGITIMATE CATHOLIC BISHOPS AND A LEGITIMATE CATHOLIC POPE ARE THE TEACHING CHURCH. END OF STORY.

Have we reached the "third admonition," yet? John of St. Thomas, call your office! https://www.lifesitenews.com/blogs/new-book-presents-multiple-open-letters-to-pope-francis-correcting-his-errors I think we are so used to this insanity that we hardly think about it or its implications any more. And I am NOT speaking about the doctrinal insanity of Francis!
4 comments
Read more

Invalid Sacraments. How a Subjectivist Epistemology and Philosophy (Phenomenology and Existentialism) Can Destroy the Sacraments as the Vessels of Sanctifying Grace.

Francis Definitely Has No Doubts About Global Warming, but Does Believe that the Flood at the Time of Noah May Have Been a Myth and the Faithful Themselves May Think That the Faith itself is Based Upon a Myth.

https://www.dailymail.co.uk/news/article-9316549/Pope-Francis-warns-mankind-faces-second-great-flood-caused-global-warming.html Here is the Daily Mail's account of the relevant portion of the interview given by Francis to the journalist, Marco  Pozza:  "He [Francis] also calls for patience in faith, saying that it is a natural part of belief for Christians to have doubts in their faith and in God. But the truly faithful, he says, persevere in their beliefs despite their doubts and are in the end rewarded. While discussing justice, Francis brings up the example of the biblical flood which destroyed the world except for Noah - who was deemed virtuous enough to survive. The flood itself may have been a myth, Francis says, but it is used as an example to show how God uses wrath to punish injustice and right wrongs in the world. 'God's wrath is against injustice , against Satan,' he says."
3 comments
Read more

Benedict XVI Throws Resignationists Under the Bus. Calls them "Fanatical." Says there Can Only Be One Pope and It is Francis. He Clearly Does Not Believe that He Only Partially Resigned the Papacy. He Certainly is NOT in Revolt Against the REVOLTING Francis.