Showing posts from January, 2022
Show all

"Montini and the Mimic." Staged Farce of the Centuries. How can we speak about "Fatima" and not speak about this? Does it matter that the REAL SISTER LUCY WAS NOT THERE? But it all, sorta looks the same......nun.....pope.....statue.....crowds.....

Irmã Lúcia: um mistério dentro de outro mistério - Parte 3. Turn on the Auto-translate and Hear an In-depth Analysis of the Three Secrets of Fatima and How They Do NOT Match the Words and Attitude of Sister Lucy II. See our Video "Montini and the Mimic" at the End.

"Montini and the Mimic"-HD Explosive! The Imposter's First Appearance: May 13, 1967. How EVIL to Hijack the 50th Anniversary of the Apparitions at Fatima by the Blessed Virgin Mary. How Evil.

Biden Considering Moving Troops, Warships To Eastern Europe. Will the German Socialist Chancellor Scholz Save the West from the Warmongering American Neo-Cons?

Remember, it was the Russian mobilization on the German border in August 1914 that provoked the implementation of the von Schlieffen Plan, which, in order to avoid a two front war, caused the German Empire to head toward Paris in early August of 1914 --- and then the rest is history, World War I, World War II, the Cold War, Vietnam War, Vatican II, etc. The Neocons featured above are pushing for a mobilization on the Russian border. American blood for democracy in Estonia?
1 comment
Read more

Dr. Chojnowski: Why does it seem like July of 1914 or August of 1939? The world on the edge of world war and, yet, not really expecting anything major or catastrophic? We are in a similar situation on January 23, 2022 with the current crisis over the Ukraine. Ukraine, of course, never being a historic country itself, rather being part of the Russian or Austrian Empires or the Polish/Lithuanian Commonwealth. It became a "nation" for the first time during World World I and was quickly incorporated into the Soviet Communist State. It would remain in this condition until 1992 when it became again an independent "nation" with a huge number of ethnic Russians. These Russians were in "Ukraine" simply because they were put there by the Communist regime. Historically speaking, Ukrainian nationalism or a renewed sense of ethnic identity emerged in the Habsburg Empire that allowed these ethnic aspects to flower within its boundaries. I have known Ukrainian-American
3 comments
Read more

Some interesting text from Erik von Kuehnelt-Leddihn's book The  Intelligent  American's Guide to Europe (New Rochelle, NY: Arlington House Publishers, 1979), pp. 250-251. In this chapter, Kuehnelt-Leddihn indicates that there is "two other Slavic nations in the USSR [notice the date of publication], the White Ruthenians (also called Byelorussians) and the  Ukrainians (also called Ruthenians, Little Russians, South Russians, Black Russians). The White Ruthenians [White Russians] are found between the Great Russians and the Poles, and although the great majority belong to the Eastern Byzantine Church, they are subject to strong cultural influences from the Poles because before the [18th century Polish] partitions, they lived in the Polish-Lithuanian Commonwealth. Their language, too, is halfway between Polish and Russian....However, the White Ruthenians do not present an explosive issue in the USSR.      This is not the case true of the Ukrainians, who first developed a str
2 comments
Read more

Ratzinger Also Knew Something Else and He Covered It Up Officially for 30 Years...........Hello! CNN? 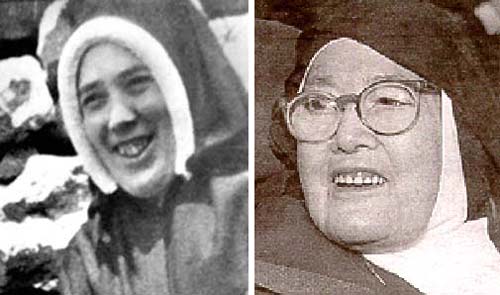 Bergoglio Puts on his Black Cap to Render Sentence of Death to "Latin Mass" Communities in the Counterfeit Church. Why are they in union with Apostates anyways?

Something I Missed. Last Year Poland Banned Most Abortions Against the Furor of the European Secularist Union, the Liberal Polish Civic Party, and the Clueless Polish Youth Betrayed by their Putative Church Leaders.

https://www.cnn.com/2021/01/28/europe/poland-abortion-restrictions-law-intl-hnk/index.html Also, in 2022, a Maltese Center-Right politician, who has become president of the European Union Parliament, is being attacked for your opposition to abortion, even though the lady has been a big supporter of Sodomitic rights in the European Union. In secularist, post-Vatican II Europe, ANY vestige of the Catholic civilization and the Divine Order must be wiped out. https://www.cnn.com/2022/01/18/europe/roberta-metsola-european-parliament-election-intl/index.html
1 comment
Read more

January 18th, Feast of the Chair of St. Peter in Rome the Touchstone of Certainty Concerning the Answers to the Greatest Questions of Human Life. If Anyone Says Anything Else, They are Liars and Heretics.

Update on Traditionis Custodes at St. John Cantius. The Grim and Necessary Consequence of Submitting to the Modernist Heresiarchs. You have to accept it when they order you to participate in the liquidation of the Catholic Religion. At least we will still have our "beauty." Will the Church die, not with a bang, but with a lisp?

If you have not seen Sister Lucy Truth Films New Website, it is Fantastic!

"The Fatima Cash Cow" Do not support any organization that puts forward the fake "Sister Lucy" as the real Messenger of Fatima. Don't help cover-up one of the greatest crimes of the 20th century.

Announcement: Sister Lucy Truth Presents 3-Dimensional Verification of its Findings. There WAS an Imposter. See the Amazing Renderings in our New Video, "The Clay Speaks." Sculpture Has Done What We Could Not Otherwise Do in this Life, Place the Two Women Side by Side!

Francis Gives Ringing Endorsement to Vaccination. US Supreme Court Does Not Prevent the Government Vaccination Mandate from Going into Effect Today.

https://www.cnn.com/world/live-news/omicron-variant-coronavirus-news-01-10-22/h_9b46624f6e07190f8f0864055c76d5fb Pope Francis calls for "reality therapy" on vaccines  From CNN’s Delia Gallagher in Rome Pope Francis lamented the misinformation and politicization of vaccines and called for “a sort of ‘reality therapy’ that makes us confront the problem head on.”   “Vaccines are not a magical means of healing,” the Pope said on Monday during a speech to ambassadors accredited to the Vatican, but they are “the most reasonable solution for the prevention of the disease.”  Unfortunately, Francis said, people are influenced by “baseless information or poorly documented facts” which distort reality.  “Each of us has a responsibility to care for ourselves and our health…health care is a moral obligation,” the Pope said.  The Pope said that the vaccines have effectively decreased “severe repercussions” of Covid-19 and efforts to vaccinate the general population should continue.   Fra
4 comments
Read more

New Archive on Masonry Unveiled in Poland. It was put together by the anti-Masonic National Socialists in their War Against Freemasonry. This article also speaks about the Communists Opposition to Masonry. Let me think....Who were the Powers in World War II Supportive of Masonry? Anything about Portugal in there? Churchill, Roosevelt, Truman, and Eisenhower Call Your Office!

Still waiting for my letter from Francis for service to the Catholic Church. I did not realize 40 years ago that you would have to side with those who reject the Catholic Faith and Catholic Morals in order to be getting one of these letters.

Ratzinger's Protestant Definition of the Priesthood. The Fraud Perpetrated by this Man for 60 years is Mind-blowing. I Guess if You Only See Externals, You Will Fall for his Neo-Modernism.

A Lutheran "Lord's Supper." Look familiar? Game: Find the Catholic Priesthood in anything said below by Cardinal Ratzinger in God and the World :  "Well, first of all, the Catholic priest is there in response to the mission of Jesus Christ, in the authoritative pattern of the apostles. So he is not the figure of the priesthood as seen in the general history of religions [as a sacrificer of actual flesh and blood?]. The standard for this class, if we may call it that, derives from the figure of the apostle, as created by Christ. Christ gives him [the "Catholic priest"] the task of proclaiming his Word, proclaiming himself, proclaiming the promise he has given us [this is the fundamental task of the "priest"]. And within the framework of this proclamation [while being a simple proclaimer of the "word"], which is always a task of love, of building up the Body of Christ [but not giving it to the faithful!], of service to the poor [but not a
4 comments
Read more

It is clear why this man cannot be called an orthodox Catholic, but how can he be called a "traditionalist"? More from "God and Man."

Another quotation from Joseph Cardinal Ratzinger's God and the World : "I would really say that just as the Liturgical Movement that led to the Second Vatican Council was something that grew slowly --- and that they very quickly became a flood --- so here, too, it is a matter of an impulse emanating from people who celebrate a living faith [Not pure unadulterated Modernism?]....If out of this a kind of movement develops from within and is not simply imposed from above, then it will come. [Peter Seewald asks, "Should Masses be said in Latin again?] That is no longer going to be possible as a general practice and perhaps it is not desirable as such  [emphasis mine]. At least it is clear, I would say, that the Liturgy of the Word should be in peoples' mother tongue. But otherwise, I would be in favor of a new openness toward the use of Latin [Notice, there is no reference to the use of a tradition, pre-Vatican II liturgy, just "Latin"].
2 comments
Read more

Don't Worry. The Man Upstairs (in the Papal Apartment) Will Give Us Cover! To start the New Year of 2022, here is another quotation from God and the World , an Interview with Cardinal Josef Ratzinger, pp. 326-327 (2000, published in 2002). I will highlight in red  the parts that would be declared heretical in any normal Catholic world: When responding to a question about Our Lord Jesus Christ's Agony in the Garden, the Cardinal says: "To a certain extent I see here the struggle between the human soul and the divine soul of Jesus Christ . Jesus can see the whole abyss of human filth and human awfulness which he has to carry and through which he must make his way....This is not just anguish in the face of his execution: it is being confronted with the entire, fearful, abyss of human destiny, which he has to take upon himself. The Greek theologian Maximus the Confessor depicts this process in a particularly impressive way. He shows us how the 'alchemy of being' is acc
5 comments
Read more

Soviets were Flexing their Nuclear Muscle in the Days and Weeks before the Critical 1958 Papal Conclave. Coincidence? See the CIA Bulletin from October 25th (The opening day of the Conclave) Below.