Showing posts from November, 2021
Show all

Fatima Crime The Trailer. Which filmmaker will open up this story for the whole world?

I told you he was going Novus!  https://onepeterfive.com/pope-francis-suppresses-sacred-heart/?utm_campaign=shareaholic&utm_medium=email_this&utm_source=email Below is the text from John Salza's most recent article on onepeterfive. I must admit, I did not read the whole thing. The below was the "stick it to you" section. For me it was the "gag me with a spoon" moment. I know he is going to threaten to sue me for unauthorized posting of the next two paragraphs! John, too bad you were pretending to be a traditionalist when the fake Sister Lucy was writing her love letters to John Paul the Idol Worshipper. Already we see Catholics, many new to the traditional movement, reacting to the  motu proprio by expressing contempt for the Pope and the bishops, and publicizing the same throughout the world (i.e., internet), which is causing further division in the Church (publicly inciting animosities or hatred again
6 comments
Read more

How Much did Montini and Escriva have to do with Sister Lucy's departure from the Dorothean Order and her entrance into the Carmel? Was this new cloistered existence and the removal of her teeth, in 1948, part of the plan?

When will these "saints" be brought to justice?   A Friend of Sister Lucy Truth summarizes some of the information presented in the podcast by Profesosor Bezerra. Very Interesting. The main question is: How much was the Opus Dei involved in the case? Escrivá had met Sister Lucy in the 1940's and, for some reason, she decided to become a Carmelite, against the will of her superior. She, then, wrote a letter to Rome, because it would be easier for her to be transferred to a Carmel with an approval by Pope Pius XII. By that time, Monsignor Montini was already in charge of taking care of correspondence in Rome. He was a very close friend of Escrivá's by that time. One night, Sister Lucy had a toothache and the dentist told her that all of her teeth should be removed. Indeed, it would change her dental arch a little and it would facilitate a replacement. Besides, the Carmel in Coimbra was restarted in the late 1940's. Freemasonry had taken i
3 comments
Read more

Swiss Approve by Bigger than Expected Margin the Covid Green Pass. How Will This Affect Menzingen and Econe?

Another Nothing Burger from the FBI: Sister Lucy Truth Receives Pictures of Newspaper Articles and a Telegram from 1963 Concerning a Rumor about John XXIII having Stomach Cancer. Undaunted, We Will Now Actively Pursue a Very Specific Request for Documents from FBI, CIA, State Department, and the Justice Department. We are NOT Giving Up.

"Lois Gibson - All Forensic Reports For Sister Lucy Truth- EXPLAINED". How more definitive can you get?

Here are the list of the 53 Cardinals who met in Rome for the Conclave in Rome in October 1958.  https://en.wikipedia.org/wiki/Cardinal_electors_for_the_1958_papal_conclave Dr. Chojnowski: This telegraph from Ambassador Zellerbach (US ambassador to Italy) and the Secretary of State of the United States under the Eisenhower administration, John Foster Dulles is a clear path mark indicating to us what we should be looking for as regards the happenings in the 1958 papal conclave that met from October 25-28, exactly 2 weeks after this telegram to the US Secretary of State was written and sent.  What do we read in this telegram and why does it matter in our investigation into the fate of Sister Lucy dos Santos of Fatima? We do not, as of yet, have a smoking gun telegram, but this one is clearly a picture of a double-barrel shot gun loaded, locked, safety off, aimed, and finger on the trigger communication. The US government seems an imminent "threat" and it is ready to act --- n
32 comments
Read more

"Hand Over the Church." "We will see what 'spiritual initiatives' we can launch. Mr. President." https://history.state.gov/historicaldocuments/frus1958-60v07p2/d390 390. Memorandum of Conference With President  Eisenhower Rome ,  December 6, 1959 . Those present: The Pope Cardinal Tardini Msgr. Samore Lt. Col. Vernon Walters The President said how pleased and honored he was to have this opportunity to meet the Pope during his visit. He had undertaken this trip to a part of the free world which was extremely important. He did not expect any new treaties or agreements to result from his trip but if anything could be done to advance the cause of peace , he would feel that it had been worthwhile. As he approached the end of his term as President, he felt that his efforts, which earlier might have been thought by some to be politically inspired, might now perhaps be more effective. He was also visiting a number of countries in
3 comments
Read more

We DO have this document! Does this Telegram to the State Department on October 11, 1958 Portray a US Government Favorable to an orthodox Catholic who Upholds the Social Kingship of Christ placed on the Papal Throne? 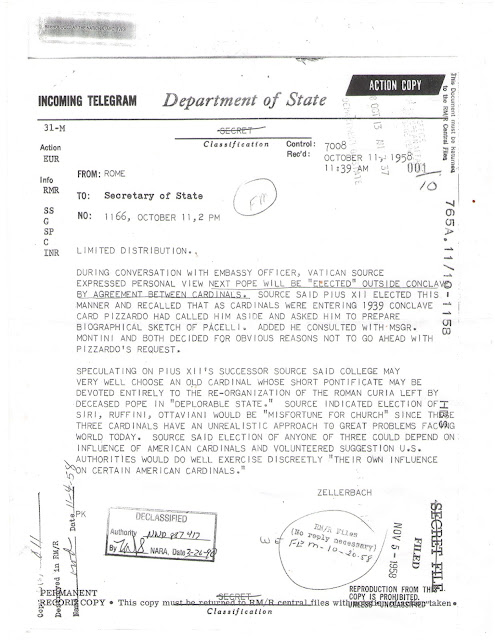 What do our readers think about this document? Was the US government under Eisenhower/Dulles ready to throw the election to a Liberal Modernist who would fit in with the Americanist ideology? Even one that was very "open to the Left"?
4 comments
Read more

Announcement: After Months of Inquiry, the CIA, the State Department, the National Archives, and the FBI Indicate that They have No Documents Relevant to the 1958 Conclave, John XXIII, or Cardinal Guiseppe Siri. 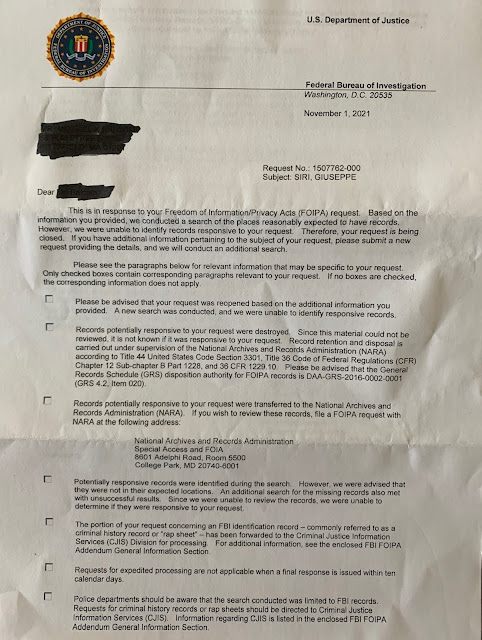 Notice they do not tell us WHY this is the case? We tried to locate official US documents relevant to this critical conclave that not only determined the fate of the institutional organization of the Catholic Church, but also the fate of Sister Lucy dos Santos, Seer of Fatima. Sister Lucy Truth said that it would try. It did.
3 comments
Read more

Israel Owned the US Congress...but that is a good thing? Some interesting statements from Donald Trump.