Dr. Chojnowski: Le Figaro,  termed by Wikipedia the oldest French daily newspaper and one of the two newspapers, along with Le Monde, calls the election of Fr. Davide Pagliarani the "toppling of Bishop Fellay." Now, says the paper, "those who oppose a deal with Rome are in charge." They are surprised by this since they report that Bishop Fellay was the favorite to win re-election as Superior General! Readers, I reported to you early that Fr. Pagliarani was the favorite and that Bishop Fellay was not going to be reelected.clerical-rumors-fr-david-pagliarani.html I also reported to you that the victory by Fr. Pagliarani is being seen as a victory of the "Center-Right." Here is the article from Rorate Coeli: 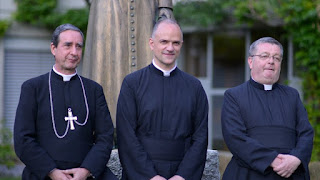 Lefebvrists: Bishop Fellay is toppled, Father Davide Pagliarani becomes new Superior-General
by Jean-Marie Guénois
In the setting of a General Chapter that took place Wednesday in Ecône, Switzerland, a new Superior-General was elected to head the Society of Saint Pius X, toppling the current Superior, Bishop Fellay, that was nonetheless considered the favorite. With this new man in charge, Father Davide Pagliarani, it is the side opposed to a rapprochement with Rome that has now has the upper hand.
It is a surprise. After two terms of twelve years heading the Society of Saint Pius X -- founded by Abp. Marcel Lefebvre, leader of the opponents of the Vatican II Council -- Bishop Bernard Fellay, 60, of Swiss nationality, was not re-elected as Superior General. Yet, he had been considered as the favorite.
...
It was also learned in the evening that Bishop de Galarreta and Father Christian Bouchacourt -- of French nationality and superior of the District of France -- had been elected "assistants" of the new Superior. The orientation of this new team suggests that the dossier of rapprochement with Rome could slow down, or stagnate, considering how relevant are the doctrinal disagreements between the Vatican and Ecône.