Fr Rafferty Interview w Sr Lucy of Fatima/Brown Scapular, Consecration. An Account of the 1950 Interview with the Real Sister Lucy. Was there a 7th Coming of Our Lady or Will There Be One?

- July 14, 2022
Dr. Chojnowski: In this fascinating lecture, given in 1958, Fr. Howard Rafferty speaks about his August 15, 1950 interview with the real Sister Lucy at the Carmelite Convent in Coimbra. At about the 20 minute mark, Fr. Rafferty describes the woman he met on that day, he says she was, "a peasant-type girl....does not look delicate....[He asks the audience to] recall the features of her face as you have seen in her pictures, ROUGH sort of features, THICK sort of features, you would say. And I recall what Walsh [who had also met with the real Sister Lucy] said in his book Our Lady of Fatima, 'She showed no signs in 1917 of becoming the Miss Portugal of that year. In other words, she is not beautiful." 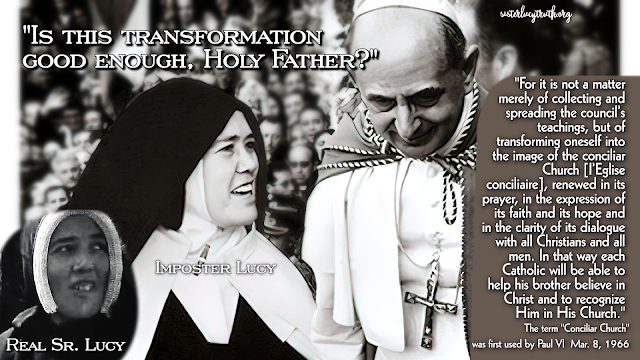 It is Amazing What 50 Years Can Do to Improve Your Appearance!
Even though Fr. Rafferty, who was a Carmelite Priest and head of a Confraternity of the Brown Scapular, had come to Coimbra with a list of questions, Sister Lucy informed him that she was not allowed to answer questions, "I have been FORBIDDEN FROM ANSWERING ANY QUESTIONS." When she was given permission to speak by the priest accompanying Fr. Rafferty, Sister Lucy said that Our Lady had told her, during the September Apparition in 1917, that she would come AS OUR LADY OF MOUNT CARMEL in the October Apparition. In contrast to the Imposter Sister Lucy, who in the book Calls, in the section on the appearance of Our Lady of Mount Carmel, does not mention the wearing of the Brown Scapular at all, Sister Lucy tells Fr. Rafferty that, "The Rosary and the [Brown] Scapular are inseparable. You cannot have one without having the other."
Interestingly enough, Fr. Rafferty, being able to see Sister Lucy in 1950 but NOT in the Fall of 1957, was able to ask a few more questions of the Carmelite before their one-time visit ended. In this 1950 meeting, Sister Lucy indicate that the Holy Father [Pope Pius XII] had NOT SEEN THE CONTENTS OF THE THIRD SECRET YET, nor had he been told what the contents were. Also, LUCIA HAD NEVER BEEN TOLD TO SEND THE LETTER TO HIM. With regard to the Third Secret, Sister Lucy could not speak to Fr. Rafferty about it. Even though this was not said, the tone of the priest's presentation seems to say that the Secret was not even in Rome in 1958. But this, of course, could have been a simple matter of Fr. Rafferty not knowing of the transference of the letter bearing the Third Secret. He takes it for granted, like Sister Lucy seemed to do, that the contents would certainly be made known to the public by 1960, as Our Lady had asked.
Also, something that I was not aware of, Our Lady, during the May Apparition at Fatima, says that she would come 7 times. Since the Apparitions in 1917 only involved 6 Apparitions, when was the 7th time? 1929 to ask for the Consecration of Russia? Or are we still awaiting this?