Democratic Values Affirmed and Condoned by the Church, Correct? Wrong. The Church, through the teaching of Pope Leo XIII, clearly states that Popular Sovereignty is NOT an Acceptable Basis for the State.

From the papal encyclical of Pope Leo XIII, Diuturnum "On the Origin of Civil Power" (1881).

5. Indeed, very many men of more recent times, walking in the footsteps of those who in a former age assumed to themselves the name of philosophers,[2] say that all power comes from the people; so that those who exercise it in the State do so not as their own, but as delegated to them by the people, and that, by this rule, it can be revoked by the will of the very people by whom it was delegated. But from these, Catholics dissent, who affirm that the right to rule is from God, as from a natural and necessary principle.

6. It is of importance, however, to remark in this place that those who may be placed over the State may in certain cases be chosen by the will and decision of the multitude, without opposition to or impugning of the Catholic doctrine. And by this choice, in truth, the ruler is designated, but the rights of ruling are not thereby conferred. Nor is the authority delegated to him, but the person by whom it is to be exercised is determined upon.

7. There is no question here respecting forms of government, for there is no reason why the Church should not approve of the chief power being held by one man or by more, provided only it be just, and that it tend to the common advantage. Wherefore, so long as justice be respected, the people are not hindered from choosing for themselves that form of government which suits best either their own disposition, or the institutions and customs of their ancestors.[3]

8. But, as regards political power, the Church rightly teaches that it comes from God, for it finds this clearly testified in the sacred Scriptures and in the monuments of antiquity; besides, no other doctrine can be conceived which is more agreeable to reason, or more in accord with the safety of both princes and peoples.

Dr. Chojnowski: How could the revolutionary democracies or the totalitarian atheistic states of the modern age not come under the condemnation of the Moral Teaching of the Church, as this is applied to the political realm. Clearly no modern democracy satisfies the criterion necessary for democracy to be an acceptable form of government for the Catholic. All modern democracies, root their legitimacy in the popular will, which they say is sovereign. In all modern democracies --- and I cannot think of any democracy in which this is or was not the case (other than, perhaps, the plebiscites under Franco or the authoritarian New State under Salazar) --- political power is explicitly rooted in the popular will and is only "given" to the designated rulers for a time; this time ends when their term expires (a term decided on by the popular will) or when the people, through voting, revoke that political power and give it to another.

Even the teaching that no particular classical form of government is intrinsically immoral and unacceptable is correct, his inclusion of democracy (majority rule and one man one vote) in the list of acceptable forms of government is contingent upon it being only a means of designating the ruler. Once the ruler is designated, the power is given to him --- or her -- by God and sovereignty continues to reside in God and NOT THE PEOPLE. In the context of the Catholic Faith, this is the Social Kingship of Christ, to Whom all power has been given by the Father. The revolution-based governments -- whether in 1649 (Cromwell) or 1776 (Jefferson's Declaration of Independence), or 1789 (French Revolution) -- are by their very nature against the fundamental teaching of the Catholic Church, which invests sovereignty and governmental power in God. No wonder the Catholic Church has to be "done away with," beginning with John XXIII, and a politically acceptable substitute put in its place. Such a Church, always frowning on "free republics" and "free democracies," could not be tolerated. The Americanists and their European accomplices at Vatican II, ensured that a new Church would be born with an always smiling face! 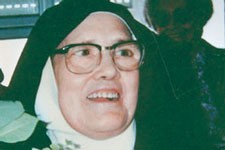