Men in Orange on Left and Right: Wolfgang Smith's "Christian Gnosis" Looks to India to Find a Way Out of the Post-Vatican II Crisis. 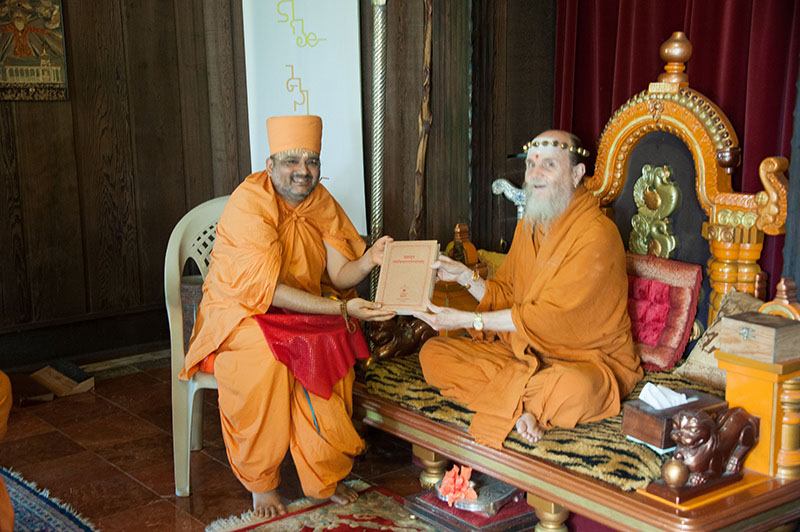 "Isn't the Latest from Angelico Press Great, Swami?"
Dr. Chojnowski: The infiltration of Catholic Traditionalism by Neo-Manichaean elements has clearly been going on for at least a generation. It was, however, Dr. Wolfgang Smith's 2018 print, In Quest of Catholicity: Malachi Martin Responds to Wolfgang Smith, that fully alerted me to the strange and dangerous infiltration of Neo-Manichaean and Occult ideas into the ranks of "Catholic Tradition" from those professing to be "of the Right."
For an example of this apostasy from the Right, filtering itself into Catholic Tradition, we only need refer to the 2008 book by Wolfgang Smith entitled, Christian Gnosis: From Saint Paul to Meister Eckhart. In this print by Angelico Press, we find the unveiling of the apostasy that was perhaps hidden for a number of years behind the veils of "anti-scientism" and an appreciation for "ancient cosmology." What we found in The Quest for Catholicity, was a desire for a "new Thomas Aquinas," a new concept of the Trinity, a new reading of Christian Revelation from the vantage point of the Jewish Kabbalah.
In this text, and also in the text of Christian Gnosis, we find a smug arrogance, which cannot publicly defend itself, that separates Christian believers into those who adhere to the letter of the Sacred Scriptures and the actual public content of Sacred Tradition, and those who are "initiates" into a hidden doctrine that "comes from Christ and the Apostles" but is only handed down orally and "in secret" to those with an understanding capable of grasping an esoteric knowledge that seems to directly clash with the doctrinal teachings of the Catholic Church made through its popes, councils, doctors, and orthodox theologians. If we are to get hold of this "higher" and "esoteric" knowledge --- not you reading this blog post, but the initiates that know that they know and know that you don't know --- we must look to sources like the Jewish Occult Kabbalah and the writings of Lutheran Tinkers of the 17th century, namely Jacob Boehme, whose mystic insights trump the public teachings of the Church and those of the Church Fathers. They certainly are far beyond the scope of the "exoteric" St. Thomas Aquinas.
In the text, Christian Gnosis, Wolfgang Smith compares orthodox Catholics and adherents to any form of dogmatic public religion to "children" and speaks of the "true Gnostic," as someone who is "able to converse with children -- able to enter into their world, so to speak --- without forfeiting the superior knowledge that is his own (p. 10)."
I think you get the point. There are other more interesting parts of this book, however, we cannot leave chapter 1 until we mention the ultimate goal and content of the "esoteric knowledge" of the "initiates" who can even eat "meat offered to idols" because they understand that it is not unclean (p. 10).  This "solid meat eater" rather than the "milk drinker" --- that's you and me --- is "The Gnostic...[who] is the perfect man....In the entire throng of the Christian faithful, the Gnostic alone measures up to the commandment of Christ: 'Be ye therefore perfect, even as your Father in heaven is perfect' (p. 25)." Who at present has this type of knowledge and where exactly can you find it? Let's let Dr. Smith himself tell us where he found it: "So much for my primary reason for broaching the 'Vedanta.' The second motivation stems from the life experience of the author, who, as it happens, was 'returned to his Father's house' through the living touch of 'ancient' India. Briefly stated, it is my belief that 'India' may have a role to play in the spiritual revitalization of contemporary Christianity: that the 'East-West' dialogue,' about which we have heard so much, may indeed be providential....The Christian seeker of our time --- more, perhaps, than ever before --- has need to 'recollect,' to take possession of what in a way is already his by virtue of bequest. The treasure he seeks is 'hid in a field' as the Savior [i.e., Our Lord Jesus Christ] declares but sometimes it takes a 'stranger' [Hindu Yogis] to lead us there" (pp. 34-35).
On this Feast of the Immaculata, it is fitting that we mention Smith's gnostic transformation of the Blessed Virgin Mary into an esoteric demiurge. Again, when speaking about the true Gnostic who alone head the Savior's call to perfection, Smith writes, "To transition from gnosis ex parte to the final consummation, it is needful to 'pass through' an immolation: everything that we know, everything that we possess, everything that we presently are (or take ourselves to be) must be offered in sacrifice; and this is something only Love --- only the highest Love --- can do. It is this agape, then, whose praises the Apostle sings: the Agape which Deo volente, will 'see us through' to the End. And that agape -- as the Mother of supreme gnosis --- does not 'vanish away,' but remains eternally united with her Child (as we behold in icons of the Virgin)."