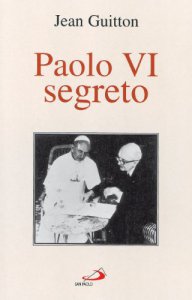 What Jean Guitton, close friend of Paul VI, said about his friends 1967 meeting with "Sister Lucy"

Let us remember that that Pius XII and Paul VI had refused to grant her a one-to-one meeting. As Paul VI had seen her on May 13, 1967, Guitton asked him: “What impression did Lucy make on you?”

“Oh! She is a very simple girl, an uncomplicated peasant woman. The people wanted to see her, and I showed her to them.”

Dr. Chojnowski: The first thing that strikes you about this statement coming from Paul VI concerning his impressions of "Sister Lucy" is their dismissive tone. He clearly does not want to speak about her, but since his good friend Guitton has brought up the subject, he must say something. Also, his "meeting" with "Sister Lucy," according to contemporary newspaper accounts, only lasted 3 minutes and much of the 3 minutes was taken up rejecting any attempts at a personal meeting between the two. Knowing how many faked photographs there were of the event of May 13, 1967, you can wonder if they even met for 3 minutes. First, Sister Lucy, the real one of the Fatima Apparition was 60 years old at the time. What would be the likelihood that the first way that you would characterize a 60 year old woman would be as a "girl." Second, how would you know that someone is "simple" if you only spoke to them for 3 minutes and much of that time you were dismissing their attempts to speak together more fully? Thirdly, if you actually read the content of the letters and journals of Sister Lucy, prior to 1967, all of which have been authenticated by an expert handwriting specialist, you find that she is not at all a "simple" peasant girl, but a profound and complicated thinker. On the part of Montini, this is a way of dismissing and undercutting the importance of meeting the woman that, apparently, even Jean Guitton thought, was the real Sister lLucy. One thing we might draw from this exchange is the high level of secrecy maintained concerning the disappearance and elimination of the real Sister Lucy and her substitution by a woman who has been identified by facial recognition technology to be as much as 30 years younger than the real Sister Lucy. By even asking, in clear anticipation and interest, what "Sister Lucy" was like, in person, he must not have know about the greatest substitution in the history of the Church and the world. The substitution must have been known by only small circles of people.

The revolting personal dismissal of "Sister Lucy" shown by Montini in this statement is also striking. By saying, "The people want to see her, so I showed her to them," he indicates his personal disinterest in the meeting. This statement also makes you wonder whether the imposter was first recruited for this role, specifically for this event in 1967. Clealyr Paul VI did not care about seeing "Sister Lucy," he indicates this by refusing to meet privately with her and, also, on account of the very few images which have the two actually together. The ignorant intellectually backwards crowds wanted to see 'Sister Lucy" ---- they were not there to hear about the Great Leap Forward of Vatican II --- so he showed them a "Sister Lucy." And even one that had lost 20 years and looked like a nun from the set of "The Bells of Saint Mary's"!

Let us face it. Giovanni Battista Montini's statements concerning his meeting with "Sister Lucy" are disgusting, because he was disgusting. What involvement he had in the disappearance and substitution of Sister Lucy of Fatima with a dummy substitute has yet to be determined, however, he obviously knew that the person he was dealing with was not the true Seer of Fatima.