As We Get Ready to Hand Them Out, I want some Reparation Payments! My Italian Immigrant Ancestors' Struggles and Humiliations USA certainly deserves some consideration. 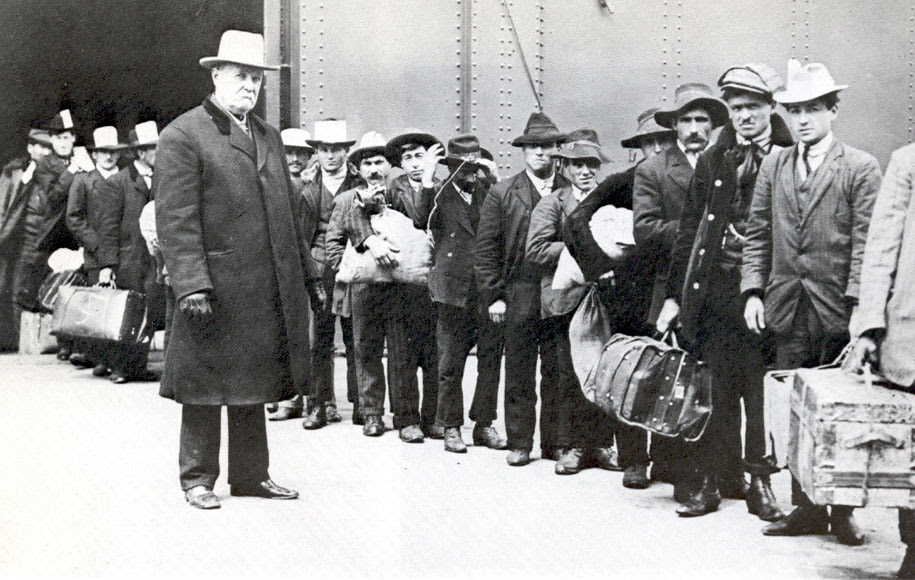 Knowing the current militancy for "reparation payments" for Black and Native Americans because of past injustices committed against their ancestors by citizens of the United States, it was a very fetching moment when I read the notes that my mother and her cousins had taken of their interviews with their mothers and aunts. My great-grandparents had come from Calabria to New York and then to Philadelphia and then, ultimately, to New Britain, Connecticut in 1910.  According to the notes, my great-grandfather left Italy because in the post-Risorgimento Masonic regime of that year and in that part of Italy (the toe of the boot!) there was no work. My great-grandfather came to the United States to look for work in order to support his young family of a new wife and a young daughter (Catherine --- who ended up getting me involved in the Blue Army and was the first one who made me aware of the Fatima Message). When he, Salvadore Romeo (wouldn't you know it!) came with two of his brothers to Ellis Island in search of work, the US immigration officials decided that he needed to change his surname since "there were too many of those coming over." The immigration officials, having absolutely no respect whatsoever for  these mens' family pride or simply identity, changed the family's surname to "Arena." Having to adopt an attitude of passive submission in order to survive, the family simply became the "Arenas" and he became Salvadore Arena. When Salvadore had established himself as a manual worker on the railroads in Philadelphia, he went back and got his wife and daughter to bring them to the United States.
My great-grandfather would have 10 children in total and in order to support his family he worked 72 hours a week, from Monday through Saturday. On Sunday, he and his family would go to church. From the money that he earned he was able to finally buy an apartment building, which he rented out to other Italian immigrants. As the interviews indicate, sometimes he was not paid rent for up to two years by some of these families. Also, my great-grandmother Letizia would DO ALL OF THE WASHING for the families in her and her husband's apartment building. I really don't know why she did this. But, apparently, she did.
In order to pay for herself and help support her family, my grandmother, Salvadore's daughter, not only went to school during the day --- Salvadore wanted all of his daughters to go on to college, none of them, however, did --- but worked from 4 to 11pm AFTER SCHOOL in a local shirt factory. For working these hours over the course of 5 days, my grandmother would receive the pay of $3. FOR AN ENTIRE WEEKS WORK! This was in 1933. I have not mentioned my grandmother's first name for a reason. You see when she was baptized she was baptized as Immaculata Arena. When she was enrolled by her Italian immigrant family at the local public kindergarten, must have been in 1921 -- 100 years ago --- her kindergarten teacher decided that she, the teacher, did not like the name "Immaculata" very much, whether she thought it was awkward, or "un-American," or she was simply an anti-Catholic bigot, she decided to change my grandmother's first name to "Marjorie." I guess because of the passive attitude of the immigrants, this was accepted to. So my grandmother had a completely manufactured name because of prejudice and bigotry. She would have a further manufactured name when she married my second generation Italian grandfather, whose family changed its name from Riccio to Rich in order to avoid anti-Italian prejudice. God bless the valiant lives of all of these people. But where are MY payments? When I get some digital pictures, I will post them here.