The Dawkins Delusion: Dr. Ignacio Ferrin, Professor of Astrophysics, based upon his study of the Miracle at Fatima on October 13, 1917, has refuted Richard Dawkins' Facetious Mockery of the Fatima Miracle. 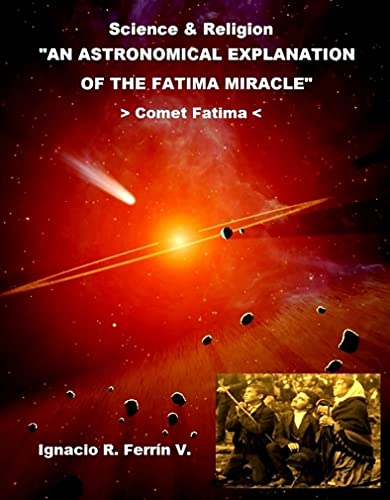 Comments on the “Fatima Miracle” written by Richard Dawkins in his book “The God Delusion”1, pages 116 and 117.

Quote: “On the face of it mass visions, such as the report that seventy thousand pilgrims at Fatima in Portugal in 1917 saw the sun “tear itself from the heavens and come crashing down upon the multitude”, are harder to write off”.

- To write the book on the “Astronomical Explanation of the Fatima Miracle”, I had to search 1600 pages of Fatima documents page by page and cannot recall having seen the words “tear itself from the heavens” or “come crashing down”.   The words most commonly used were “dancing” and “falling on the people”.

Quote: “It is not easy to explain how seventy thousand people could share the same hallucination.  But it is even harder to accept that it really happened without seeing it, but feeling it as the catastrophic destruction of the solar system, including acceleration forces sufficient to hurl everybody into space”.

- Again, the author is using words that were never uttered in Fatima, or at least were not in the 1600 pages that I studied in detail.   There was no talk of the “catastrophic destruction of the solar system” or of the “acceleration forces sufficient to hurl everybody into space”.   In fact, if you accept our hypothesis that the event was a comet entering our planet atmosphere, there is no way or sufficient energy for a comet to produce a “catastrophic destruction of the solar system”.    These words point out to the lack of research by the author, since the energy needed to destroy the whole solar system is immense, clearly beyond the possibility of a comet or even a single asteroid.   Is the author aware of the dimensions of our solar system?  Is the author aware that there are more than 1 million objects going around the Sun?  How are you going to destroy 1 million objects?  Where do the “acceleration forces” come from?  Why is he using confusing words that do not apply to the Fatima event?

Quote: “David Hume’s pithy test for a miracle comes irresistibly to mind: “No testimony is sufficient to stablish a miracle, unless the testimony be of such a kind, that its falsehood would be more miraculous than the fact which it endeavors to stablish”.

- David Hume (1711-1776) was a Scottish philosopher and an agnostics, i.e., he did not believe there is sufficient evidence to justify that God exists.   Thus, naturally he did not believe in miracles.  Our hypothesis is that a small comet entered our planet atmosphere and produced all the phenomena observed in Fatima.   As a matter of fact, there are 17 facts to prove it.  Then, as suggested above, let us assume that our hypothesis is false.   We are left with 17 unexplained facts.   But these 17 unexplained facts are so incredible, that just by themselves they are miraculous. However, in my opinion this is not a good definition of a miracle, since there is a better one.   The event at Fatima was extraordinary for several reasons, but one of them is that I had all the information needed to calculate numerically the probability of occurrence if the event had happened by chance.  The result is 1 in 61,000,000,000,000,000.    That number is so incredibly small, that we can only explain it as a miracle.

- Again we find the incorrect usage of words.  “They have been persuaded” never happened.   How can you “persuade” 70.000 people?   Contacting them one by one? No way.  They looked to the sun because something was really going on with the Sun, not because they were persuaded.   Additionally, his comment “which can’t have done much for their eyesight” is ironic and sarcastic and does not serve any useful purpose.   Contrary to this assertion, the evidence shows that they looked at the Sun with their bare eyes, and nobody was blinded.   After the miracle took place there were no reports of blindness.  Not one single report.   This is proof that something happened that allowed them to see to the Sun with no eye damage.  There is an image, a photograph, taken at Fatima on that date, 13thOctober, 1917, showing 21 people looking up to the sky at the same time (Figure 1).   If 21 people are looking at the sky at the same time, with no protection whatsoever, the obvious interpretation is that something is going on in the sky.

Quote: “But any of those apparent improbabilities is far more probable than the alternative:  That the Earth was suddenly yanked sideways in its orbit, and the solar system destroyed, with nobody outside Fatima noticing”.

- This comment does not make any sense.  Not only is it misleading but incoherent.   First, there were no accounts at Fatima that “the Earth was suddenly yanked sideways”, or that “the solar system destroyed with nobody outside Fatima noticing”.   How can you destroy the solar system with nobody in Fatima or for that matter the whole planet Earth noticing?  This is incoherent.

Quote: “I mean, Portugal is not that isolated.”* [ Points to a footnote].

Here is the footnote: “* Although admittedly my wife´s parents once stayed in a Paris hotel called the Hótel de l’Univers et du Portugal”.

- What is this?! This is not only sarcastic but incoherent.  Sarcasm does not belong to the Scientific Method.

Quote: “That is all that needs to be said about personal “experiences” of gods or other religious phenomena.  If you’ve had such an experience, you may well find yourself believing firmly that it was real”.

- The explanation given in my book on the Fatima Miracle, does not leave any doubt that it was a small comet entering our planet atmosphere.   Why do we say that there was no doubt?  Because the comet Fatima hypothesis explains 17 facts.   A fact is something real, tangible, that took place.   If you are capable of explaining 17 facts there must be some truth in your proposition.  Thus, there is nothing wrong in firmly believing that it was a real event.

Quote: “But don’t expect the rest of us to take your word for it, especially if we have the slightest familiarity with the brain and its powerful workings”.

- “Take your word for it”.  Once again, these words are not used in the Scientific Method and illustrate a lack of scientific attitude.   Science works with facts, and what we have collected are 17 facts that happened and can’t be denied.  If after reading the astronomical explanation of the Fatima miracle, you do not agree with the result, then it means that you do not believe in Science, because the research was made using the tools of the Scientific Method, and that is the best and proven method we have to understand Nature.

Isaac Asimov once wrote: “I believe in evidence, I believe in observations, measurements and reasoning, confirmed by independent observers.  I believe anything, no matter how ridiculous, if there is evidence for it”.

Our Conclusion.  The Comet Fatima Hypothesis is challenging and changing the definition of a miracle.   I find the paragraphs on the Fatima miracle written by Richard Dawkins in his book “The God Delusion” on pages 116 and 117, sarcastic and misleading by using words that have not been used in Fatima, and incoherent in some of his statements like falsely linking Fatima with the destruction of the solar system and nobody noticing.  Accordingly, his attempt to debunk the Fatima event fails catastrophically because his arguments are unscientific.

Ignacio Ferrín, Ph. D., Author of “An Astronomical Explanation of the Fatima Miracle: Comet Fatima”, Amazon, 2021.  Institute of Physics, Faculty of Exact and Natural Sciences, University of Antioquia, Medellín, Colombia.   The author states that he has followed the Scientific Method to the letter, to develop his explanation.

Figure 1.  This is a remarkable image.  I count 21 people looking up at the same time to the sky toward the Sun, with no protection whatsoever.   In my humble opinion, if 21 people are holding their gaze to the sky simultaneously, to me it implies that something is going on in the sky.   Whatever was happening, it allowed them to see the Sun unprotected.    The Comet Fatima Hypothesis explains what and why.   (Credit: Judah Bento Ruah, 1917).