"Vision of Fatima" by Sculptor Fr. Thomas McGlynn, published in 1948, Indicates the real Sister Lucy requested that Pope Pius XII Give an Address to the Portuguese People for the Silver Anniversary of the Fatima Apparition. Author Makes it Clear that the Inclusion of All the Bishops of the World with the Pope in a Consecration of Russia was Publicized to the World by 1947. 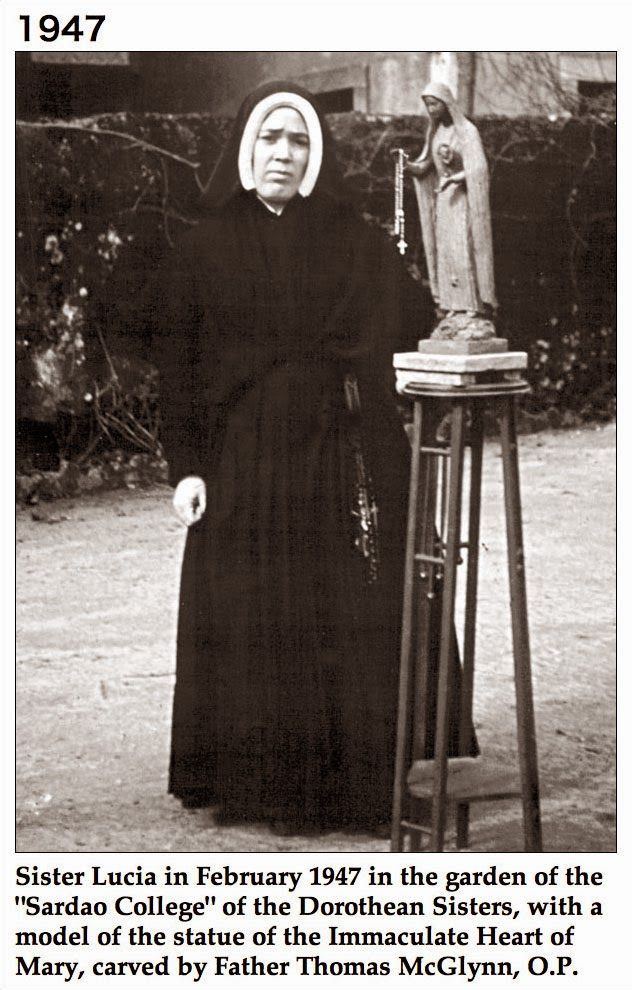 Here is the text describing the discussion of Fr. Thomas McGlynn, O.P. to the Patriarch of Lisbon in 1947 in Fr. McGlynn's book, Vision of Fatima (Boston: Little, Brown and Company, 1948), pp. 29-30.
"The important address of Pope Pius XII to the Portuguese people made in Portuguese on October 31, 1942, in connection with the ceremonies of the Silver Jubilee of the apparitions at Fatima [how different from the ceremony of the Golden Jubilee with Paul VI and the fake "Sister Lucy"] was evidently, His Eminence pointed out, a consequence of Lucy's own request made to the Holy Father, of which the Cardinal had knowledge. Lucy had said that the Blessed Virgin wanted the world consecrated to her Immaculate Heart with special mention to be made of Russia. She had declared the special grace to be granted in reward for this consecration would be the shortening of the war, and that, if the Holy Father wished to see an example of the blessings which this would bring to the world, it could be observed in the case of Portugal [namely, that the Consecration of Portugal to the Immaculate Heart of Mary, by all of the bishops of the country, had kept Portugal OUT of World War II.]"
"The Cardinal, in reply to my [Fr. McGlynn's] inquiry, said that he had not heard of the special manner of consecrating Russia to the Immaculate Heart which had lately been declared [emphasis mine]; namely, that all the Bishops of the world are expected to participate with the Holy Father on a special day in one great act of offering Russia to Our Lady's Immaculate Heart."
Dr. Chojnowski: This was back in 1948. Clearly this particular act NEVER happened. The closest the world ever came to this is when Pope Pius XII himself, consecrated Russia to the Immaculate Heart of Mary in his papal bull Sacro Vergente of July 7, 1952.