Frère Michel, who was under the misunderstanding that that the real Sister Lucy was the same woman throughout, said that "Sister Lucy" had not used the phrase "diabolical disorientation" prior to 1960. What does "Fatima in Twilight" say about this strange phrase? 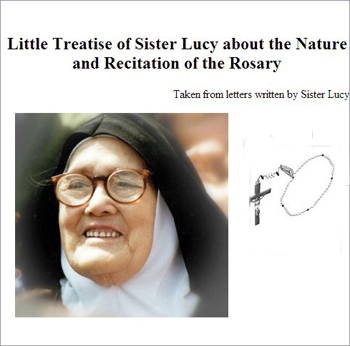 Dr. Chojnowski: Here is the account of the beginning of "Sister Lucy's" discussion of "Diabolical Disorientation," from Mark Fellow's book, Fatima in Twilight (Niagara Falls, NY: Marmion Publications, 2003), pp. 198-201.
After repeating the narrative of much of the Neo-Conservative Fatima community in which, "After 1960 Lucy had been silenced and her visitors reduced." Fellows continues the narrative that has "the conditions of isolation in which she finds herself be[ing] imposed by the Holy See." For some reason, this woman needed to be silenced even though she -- to my knowledge --- never ever challenged the Modernist narrative of "reform" and "renewal" that was the continuous fare of the post-Vatican II age.
Fellows, trying to piece together a narrative that makes no sense if Sister Lucy of Fatima was indeed charged with being the Messenger of Our Lady, insists that "Sister Lucy" "was also forbidden to speak about Fatima" --- post-1960, JUST AS SHE WAS "silenced by Bishop da Silva when, as a girl, she first left Fatima for boarding school with the Dorothean Sisters." Well, first, she was clearly told to keep quiet about the Fatima Apparitions after Jacinta, from her death bed, had warned Lucy's clergy that Lucy's life was under threat. Why make the comparison between this early prudent measure and what happened to Sister Lucy in 1960? Are the circumstances in any way the same?
Secondly, if she was "silenced," why was their a continuous stream of books, letters, and, later appearances with John Paul II , throughout the life of the woman who presented herself as "Sister Lucy." She was not silenced! She never stopped talking! And she never said what she SHOULD HAVE SAID, namely, that Catholic doctrine was being rejected by the men who were, ostensibly, charged with upholding it. This is what she should have said. This is what the real Sister Lucy WOULD HAVE SAID. That is EXACTLY WHY THEY HAD TO GET RID OF HER.
MORE ON THE ORIGIN OF THE "DIABOLICAL DISORIENTATION" IDEA, COMING SOON.