50 Years Later and We Still Seem to Have Forgotten the Warnings about the New Priesthood Issued by Archbishop Lefebvre in 1971. 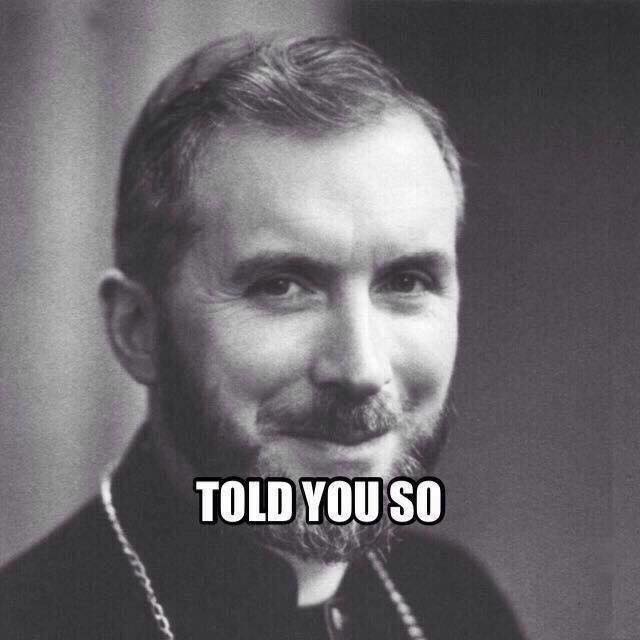 From A Bishop Speaks (Kansas City, MO: Angelus Press, 2007), pp 97-98.
Archbishop Marcel Lefebvre, Rome, March 13, 1971: The Fruits of the New Mass
"There are thus three realities needful for the reality of the Mass, 1) The Priest-Sacerdotes...having a sacerdotal character. 2) The real and substantial presence of the Victim, who is Christ. 3) The sacerdotal action of the sacrificial oblation which is realized essentially in the Consecration.
Let us not forget that it is precisely these three fundamental truths that are denied by the Protestants and Modernists. Let us not forget that it is to manifest their refusal to believe in these dogmas that their Masses have been transformed into services, into a eucharistic meal or gathering, where a much greater place is given to readings from the Bible, to the word, to the detriment of the offering and the liturgy of the sacrifice....Everything laid down in this new order clearly reflects this new conception, which is nearer the Protestant conception than the Catholic. The statements of the Protestants who contributed to the reform illustrate the truth of this naively and sadly: 'Protestants can no longer find anything to prevent their celebrating the Novus Ordo.' We may therefore quite legitimately ask ourselves whether, as the Catholic belief in the essential truths of the Mass insensibly disappears, the validity of the Mass is also disappearing. The intention of the celebrant will have a bearing on the new conception of the Mass which, before long, will be no other than the Protestant. THE MASS WILL NO LONGER BE VALID [emphasis mine]."
Dr. Chojnowski: I have always questioned how you can get "priests" who study --- and accept -- modern philosophy (e.g. Cartesian, Kantian, phenomenology) --- and still get valid sacraments and orthodox doctrine out through this strainer. You know of course that for modern philosophy, beginning with Descartes, the object of thought is no longer the things in themselves, but rather, ideas. Phenomenology, which "brackets" [existence] --- that is the "problem" as to whether the things that "appear to us" in consciousness actually exist or not, and instead, simply analyses the ideas as "meaning structures" which are simply "present in consciousness." How do you get the Consecration that brings about the Real Presence out of that? You can't and you don't. That is why they need a new doctrine called "transignification" in which the "meaning" of the "bread" and "wine" is changed in meaning for the congregation --- now it means "communal sharing" or "sharing in Christ's joy and love" --- and when the congregation is finished with its moment of sharing the "meaning" of the bread and wine can return to is brute "foodstuff" status of meaning and be shipped down the drain. It's nice clean "meaning" and not that "earthy" actual "Body and Blood of Christ" that we celebrate in NewChurch.
How do you get 50 years of this chugging through the veins of NewBishops, trained in phenomenology, Marxism, and existentialism, and still get a true Catholic and Realist intention? You can't and you don't want to. That is the whole point. But, of course, that is why you must change the form of the episcopal and priestly rites of ordination. Otherwise, Martin Heidegger might have to hit you upside your Lebenswelt.