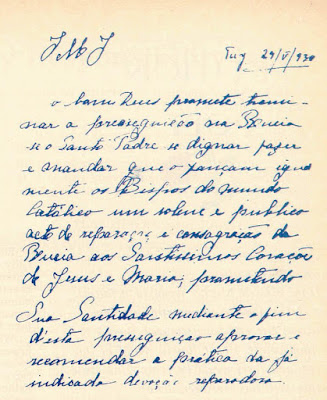 For our expert's analysis of the text released by the Vatican as the "Third Secret," see, https://sisterlucytruth.org/handwriting-analysis/
Dr. Chojnowski: "The Congregation for the Doctrine of the Faith made available to the press THE FULL TEXT of the so-called third secret of Fatima, at a press conference on June 26, 2000....in which the text in Sister Lucia's handwriting is reproduced in facsimile, so there can be no further reasonable discussion as to the authenticity and the completeness of the text [as if these are the same thing; they are not. Without the real Sister Lucy's testimony, how would we know that the text is "complete"?]. In this booklet, not only the sequence of visions but also the series of pieces written about them by Sister Lucia [hence the importance of the investigation into the identity of Sister Lucy and her apparent disappearance.]....Furthermore, the address you referred to by Cardinal Sodano is reproduced and I personally have provided an attempt at interpretation of the text [Question: Why not just ask "Sister Lucy" what it means?]....[Then follows the by now well known account of the "bishop in white" and what the Cardinal admits is a "killing" of the pope.] [However] the story does not unfold with an inescapable determinism [because JPII was not obviously killed, like he should have been if he had been the "bishop in white."], as if everything were in any case already unalterably written, but remains a story of freedom: repentance can change the vision [so why then hold it back for 40 years?] The whole secret is a dramatic call to the freedom of men."Dr. Chojnowski: I thought it was a call to recognize the awesome sovereignty of God? I wonder how much of the script for the fake Sister Lucy in the later years --- especially during her interviews with Carlos Evaristo, were written for her by Ratzinger? She speaks there about the "conversion of Russia" as not at all being a conversion to the Catholic Faith, but a conversion to Liberalism, so that everyone can choose what ever religion they want.