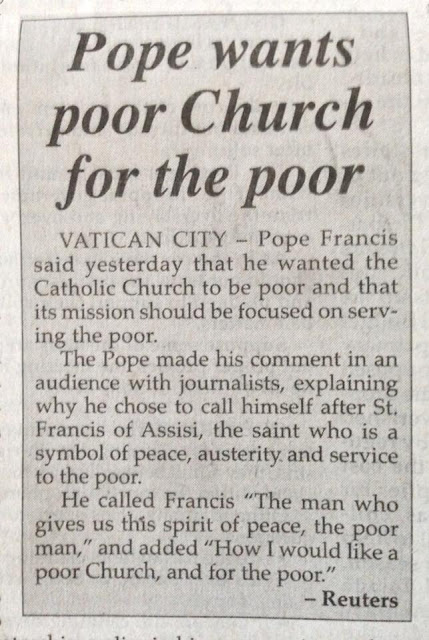 Dr. Chojnowski: I do not know what to think about this section of the recently unearthed interrogation report that has been declassified by the CIA dealing with the interrogation of a former Catholic priest and a convert to National Socialism, Albert Hartl. When describing this movement, he says that it was a movement of Catholic laymen who believed that, "the Church has lost a great deal of depth and fervor through its politics, its wealth, its superficial pomp, its so-called "American" efficiency, and its over emphasis of Catholic organizations and associations." This is what this movement did not like about the Church of the early 20th century, like the real Catholic Church. What it wanted instead was, "the ancient Christian Communism stressing subordination to every form of state authority...including a heathen state....They reject ever form of outer Church power and are concerned only with the quiet religious depths of the individual. They are for simplicity, for nature and for a religious interpretation of civilization." Sounds like the Sillonism condemned by St. Pius X and touted by the Roncallis,  Montinis, and the Wojtylas of the world. Is the essence of this the focus on inner religious feeling as BEING religion and a slavish submission to the State no matter how godless? What does he mean  or what was he doing when he said that this group was only a "pawn" in the "diplomatic game of the Vatican" and, in so far as it was supported or tolerated --- even by Pope Pius XII (so HE says) --- was only done so because of the practical political games that the Church was playing at this time. Was Neo-Modernism a dog that got off his leash and ended up killing his master? I have a feeling that there is a whole history here that most of us are not aware of. Was Hartl lying here or was this another example of Church politics gone wrong? I would really like to know if any one has some enlightening history on this topic for us.

HARTL, who has known INNITZER since .1927, states that this latest move ofSTALIN is indicative of Ruseia's eccurate knowledge of the church situation,for INNITZER w i l l prove to be just as enthusiastic about STALIN as he was aboutHITLER. His two most intimate counsellors, Monsignore Dr PFLIEGLER and prelateDr /WOLF, whom HARTL has known and observed over the last twenty years, haveelways been known as "Edel" with the Cemmunists. Both are loaders of a move- ment within the Cetholic laymen of Europe Which hARTL describes as a movementof "romanticists". In their opinion the Church has lost a great deal of depth and fervor through its politics, its wealth, its superficial pomp, its so-called"American" efficiency, its over-emphasis of Catholic organizations and associa- tions, etc. They ad.vocate the ancient Christian Communism stressing sub- ordination to every form of state authority including a heathen state, inaccordance with the ROMAN encyclical of Paul the Apostle in which he proclaimed
that everyone is subject to the authority having power over him, for every authority has been ordained by God. They reject every form of outer Church power end are concerned only with the quiet, religious depths of the individual. They are for simplicity, for nature and for a religious interpretation of
civilization.
This intellectual Catholic group, with numerous followers throughoutEurope, was very susceptible to rational Socialism and also to Bolshevism.
They saw in the church policy of both systems the Embodiment of God's will
to purge the Church of its undesirable slag. Yet they fail to see that theirgroup is only e. oawn in diplomatic game of the Vatican and only for this reasontolerated, and at times even supported by the Pope.