Fr. Kalchik Names Names and Pours His Tortured Soul Out to the Current Cold-Hearted Chief Facilitator, Francis. Let's Hold Our Breath Waiting for a Response. 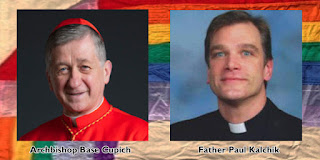 Here is the very ending of Fr. Kalchik's pointless letter to one of the chief perpetrators of the sodomy tsunami in the Novus Ordo Sect. Kalchik here names names and identifies places and describes events.
Here are his demands, which I guarantee you, will never be implemented. My advice: You and all those who had similar encounters of any such kind, should have walked away from this abomination long ago. It is not the Catholic Church, it is the Counterfeit Church --- with a totally new liturgy, new doctrine, a new priesthood, new sacraments, new canon law, new morality, new social teaching, new marriage laws, new communion laws, Leave, find the real Catholic Church in the "underground" --- hiding out in order to maintain the faith and valid sacraments and an authentic Catholic spirituality and morality.
That is why I seriously question the veracity of Judge Brett Kavanaugh's account of his "Catholic" high school experience. I went to high school and college at the same time as Judge Kavanaugh. His attempt to assert his innocence by speaking about attending a "Catholic" high school and, consequently, placing this fact on the scales in his favor and against his accusers is laughable. Here, I am not in any way judging the truth of the Judge's accusers claims nor his fitness for the Supreme Court. But such a "Catholic" defense will just not work for anyone who actually lived through those times. I did not go to the elite high school that he attended or anything close. I went to a diocesan high school in New Britain, Connecticut --- thankfully now closed down. It was a zoo. The religion teachers, when they were not speaking about nuclear disarmament and Martin Luther King, were handing out literature which described and listed all the possible contraceptive devices that could be used. They would also hand out --- I kid you not --- literature which LISTED ALL THE POSSIBLE SEXUAL PERVERSIONS THAT COULD BE COMMITTED. Everything. DURING RELIGION CLASS. This was in 1980. The school sponsored wild rock concerts in which male and female students mixed freely, with little restraint.

Now on to Fr. Kalchik's letter. I copy his demands first and then give the link to Church Militant's account. I will bold his words so they are not confused with mine.
What the Church needs right now is a moratorium upon anyone being raised to the level of the episcopacy, for a least a year. And after a year of purification is completed by all the faithful, including all priests and bishops left active, then new bishops can be considered. We cannot go on as if nothing has happened and nothing is seriously wrong. That will not exorcise the Church of the demon of predatory gay sex abusers, and a gay mafia running through its ranks. They will try to wait until the storm dies down, and come back, bringing more friends.
Pope Francis, please act like Peter. If you are guilty of removing sanctions placed upon McCarrick by Pope Benedict, step down. This would be the holy and noble thing to do.
Father Paul John Kalchik
Priest, Pastor, Witness
See Church Militant's Posting of the Letter of Novus Ordo Fr. John Kalchik pleading to Francis to do something about the homosexual predators in the "Church."
one-priests-plea-to-pope-francis