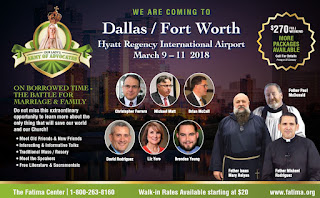 So Many Good People Gone. Another NewChurch Triumph.

We have received information that the Fatima Center, Port Erie, Ontario is suffering from a financial crisis. This has caused it to cut back on jobs, trim workers hours, and has had high ranking members of the organization leave or be fired.

If we look on the advertisement for this years conference in Dallas, it shows a Remnant take over of the organization. Moreover, those faithful who attend and have grave doubts about the validity of Novus Ordo ordinations would be left out.

I have received absolutely ZERO help from any one in the Fatima Center for my Sister Lucy Truth organization and effort. How long will they continue to speak about "the Fourth Secret," while totally ignoring the possibility that Sister Lucy herself was eliminated and a substitute put in her place. Why trust ANYTHING coming out of the Vatican. How naive can we be?

I have also heard that the movie "The Vatican Deception" about the "distortion" of the Third Secret, has not done very well when it appeared at various theaters in Canada. The Novus Ordo faithful, led by Opus Dei members, were vary hostile and repulsed by the idea that the Vatican could "deceive."

My own personal belief is that we will not revive the Fatima movement until the elephant in the room is settled once and for all. Was there an imposter Sister Lucy and if there was, what happened to the real one? If she was replaced who did it and why?

I have heard from friends that the Vatican checks out RadTrad Thomist and is aware of the Sister Lucy Truth Investigation.