200 Proof Modernism. I Have Finally Found My Copy of ON HEAVEN AND EARTH, authored in 2010, by Jorge Mario Bergoglio and Abraham Skorka. I have found the quotation which expresses perfectly the Modernism condemned by St. Pius X in Pascendi. Read and Weep. 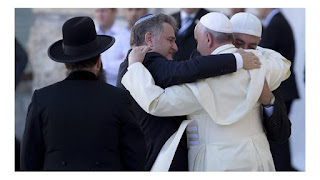 An Encounter of the Modernist kind.

Having found my copy of On Heaven and Earth by Jorge Cardinal Bergoglio and Rabbi Abraham Skorka published in 2011, I decided to take up my spiritual reading again and meditate on the chapter of the this text entitled, "On Religions." Here I found that the Rabbi and the Cardinal expressed, fundamentally, the EXACT SAME, understanding of what religion is.

The beginning of the reply of Rabbi Skorka is this:

"People often ask, 'Why are there different religions?' I believe the answer is that individuals have different experiences. A religion is formed when a common denominator is found as these experiences are shared."

Here is the substance of the reply of Cardinal Bergoglio:

"God makes Himself felt in the heart of earth person. He also respects the culture of all people. Each nation picks up that vision of God and translates it in accordance with the culture, and elaborates, purifies and gives it a system....Moreover, throughout history, there have existed circumstances that created schisms and constructed diverse communities that have different ways of living Christianity, like the Reformation. We lived through a thirty year war [30 Year War 1619-1649] and it SHAPED DIFFERENT FAITHS. It is very hard to accept and it was a disgraceful time, but that is the reality. God is patient. He waits, and God does not kill. It is man that wants to do so on God's behalf. To kill in the name of God is blasphemy.


Dr. Chojnowski: Analysis? First of all Cardinal Bergoglio expresses his pure and unadulterated Modernism which says that religion is a manifestation of inner human experience, rather than a doctrine and practice revealed by God for men to follow. Here he is articulating, as his own position, the exact doctrine condemned by St. Pius X as Modernism in 1907 in Pascendi. It is clear that his understanding of how religions form --- include the Catholic Religion --- which he clearly believes "formed" after the 30 Year War in Europe when "Christianity" split into Lutherans, Calvinists, Catholics, Mennonites, etc. In other words, the Catholic Religion is a socio-cultural manifestation, post-Reformation, just like the other "Christian faiths". The war to keep the Holy Roman Empire Catholic and to actually fight for this because it is what God would have desired is "blasphemous."

So where are we left:

1) Religion comes from man and not God.
2) Our religion is just our historical social group translating its own experience of its "feeling" of God.
3) The Catholic religion as a distinct thing and as all of us know it was produced after the religious wars of the 1600s, just like Lutheranism and Calvinism. Did not exist as such before then.
4) The Catholic religion as a thing distinct from Lutheranism and Calvinism SHOULD NOT EXIST AS SUCH.
5) The Crusades and wars to uphold the rights of God and His Church are blasphemous.