Keep Your "Engagement" Off My Sacred Religion! Here is the Video for the Met Exhibition of Desecrated Catholic Sacred Objects, Habits, Vestments, and Symbols. Maike Hickson Puts Blame Squarely on Francis and Cardinal Ravasi. 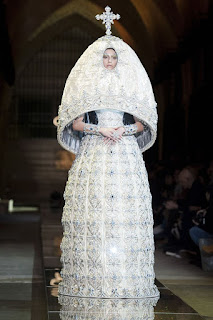 Did you know that the Vatican sent to this Cocktail Party of Antichrist a Papal Tiara Given to Pope Pius IX by Queen Isabella II of Spain? But I am sure we will have a summer of protests by the Catholics of New York over this Sacrilege.......right? Wait Until Andrew Bolton brings "his" "exhibition" out to North Idaho!

See the Promotional Video by clicking the link below and then read the article by Maike Hickson, on One Peter 5, in which she calls out the Vatican Planners of the Devil's Cocktail Party. In that article, Dr. Hickson mentions the reporting of RadTrad Thomist!

Our readers are by now well informed about the many scandalous – and also blasphemous – dresses and gestures displayed at last Monday’s the “Met Gala” in partial preparation for the Metropolitan Museum of Art’s “Heavenly Bodies: Fashion and the Catholic Imagination” exposition that was officially opened on 10 May. Our readers might also be by now well aware of Cardinal Dolan’s own shameful conduct by his joining into this scandalous event and later even defending it.
What people might be less aware of is that the Vatican, though unofficially, now claims not to have anticipated the effects of the the Met Gala which accompanies the opening of their new exhibition. This fact has been reported by the indefatigable Rome Correspondent Edward Pentin. He now writes, as follows:

The Pontifical Council for Culture chose to collaborate with an exhibition at the Metropolitan Museum of Art in New York because of the Met’s significance to culture and potential global outreach, but officials were unaware of the widely criticized gala that took place on Monday night.

As Pentin continues his report, he quotes an official of the responsible Pontifical Council for Culture, whose President – Cardinal Gianfranco Ravasi – had made first the decision to participate in the exhibition:

“We wanted to be involved and those behind it had good intentions,” a Vatican official told the Register. “As the Met is one of the most significant cultural institutions in the world, and our remit is to engage the world, we see it as important.”
But the Vatican was unaware of the Met Gala, and that the evening event would be used by some celebrities to dress up in a way deemed by many to be a sacrilegious mockery of the Church.

In the following, I shall challenge that specious claim.
That is to say, the claim that only the Met Gala itself was potentially hazardous, and not the fashion exhibition itself. Since all the attention was drawn to the Met Gala, it might be worthwhile to concentrate on the content of the exhibition itself.
When I first reported on that exhibition a few weeks ago, I was stunned by the fact that among the fashion items that were to be exhibited alongside of more than 40 sacred vestments and other sacred items from the Sistine Chapel, there was to be found a clothing-fashion for a female pope. At the time, few wanted to pay any further attention to it, and so it did not even find any mentioning in my report on it. Only a former student of my husband’s, Dr. Peter Chojnowski, picked up on my own private e-mail report on it and himself displayed that particular clothing in a post on his own blog.
However, what I was able to show in my initial report is that the exhibition also shows the clothing for a female cardinal, a female bishop, and a female priest. Any Vatican representative with a sensus Catholicus would have already early on terminated any collaboration with this exhibition. There was no need to wait for the Met Gala.
I ask our readers to watch just these two minutes on the exhibition’s promotional video in order to get a sense of what the exhibition itself is about. Forget about Rihanna showing up as a female pope at the Met Gala, and, rather, look at this video and look at a clothing which – though it had been at the time only worn by male fashion models – clearly looks like the clothing of a female pope. Other items to be displayed also show a partly transparent dress depicting the Fall of Adam and Eve.
Cardinal Ravasi, when challenged in April upon his decision to send Vatican items to New York, defended his decision and insisted upon the fact that fashion today is a form of communication. He obviously was not troubled by the fashion designs that would be exposed at the same exhibition to which he was sending sacred vestments themselves. At the time, however, the museums’ curator Andrew Bolton himself admitted that this fashion exhibition was meant to be a “provocation.”
Thus, we reasonably have to conclude that the Vatican has effectively lost a moral and cultural compass and that it needed a shocking event such as the Met Gala event in order to feel some belated embarrassment for their participation – and for their lending even such sacred items as a papal tiara, the one given to Pius IX by Queen Isabella II of Spain!
But we need to pay attention. It seems that now some journalists sophistically try to involve unexpected senior people at the Vatican in the shameful story, although they have not been decisively involved at all. The New York Times‘ Rome Correspondent, Jason Horowitz, is one such journalist. In his report on the exhibition, he highlights the purported role of Archbishop Georg Gänswein, whom some might well like to see compromised in one form or another. The personal secretary of Pope emeritus Benedict XVI is said to have been “enthusiastic” about the project after being presented with the idea of such an exhibition. “Then things really started rolling,” Horowitz adds.
Well-informed sources in the Vatican, however, now say that Gänswein played a very small, if not insignificant role in the matter of the exhibition. Also Msgr. Guido Marini – mentioned by Mr. Horowitz as well – should not be implicated himself in this troubling event, so the sources tell us. Some observers speak in this context of a “staged provocation” and “planned scandal.”
It is Cardinal Ravasi – and surely with him Pope Francis himself – who made the decision to open the Church’s treasures to the world of fashion, and even then hand them over to the world and the mockers of Catholic things. As with so many tenets of our beloved faith, we now can see what some of the sordid consequences are of such an act.
We should not be very surprised, however, that Ravasi would so closely work with an exhibition which had been heavily funded by the fashion company Versace, whose founder is an LGBT icon. In 2013, Ravasi – who has been an advocate for Vatican dialogue with Freemasonry – caused a stir when he tweeted a quote from musician, Lou Reed, who had been known for his bisexuality. He also publicly praised another LGBT icon, Davie Bowie.
The post has been slightly updated.