"Secret and Unprecedented" Visit by American Central Command Chief to Israel Indicates the Missile Attack was just a Symbolic Opening of a Much Wider Conflict --- thanks to the Neo-Conservatives. 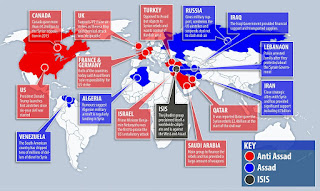 Dr. Chojnowski: It looks as if World War III by proxy is ramping up. The thing that could trigger a larger confrontation is an Israeli attack on Russian troops or a humiliating withdrawal of the Russian forces ordered by Putin. Will a proxy war between Israel (for USA or USA for Israel) and Syria/Iran quickly turn into a war between the US and Russia. It certainly seems, from the article below, that that is definitely on the immediate agenda.

Increasingly it appears that the recent US coalition missile strikes on Syria have utterly backfired: instead of weakening Syria or degrading its military capabilities, the attack may have actually served to strengthen Syria's defenses.
Since the massive strike which involved the US, UK, and France launching over 100 cruise missiles, Russia is rumored to be moving forward on delivery of its advanced S-300 missile defense system, which would be a monumental upgrade allowing Syrian defenses to far surpass current capabilities which utilize the Soviet-made S-125 and S-200 air defense systems.
Crucially, S-300s have a range of up to 150-200 kilometers (or 120 miles), bringing Syrian deterrent reach easily to within Lebanese airspace (as Israel has routinely struck targets inside Syria while firing over "neutral" Lebanese airspace in recent years), and could even extend airspace coverage into Israel itself.
Could this be the reason for some major behind-the-scenes diplomatic scrambling?
On Monday VOA News chief White House correspondent Steve Herman announced that US CENTCOM commander General Joseph Votel is in the midst of "a secret and unprecedented visit to Israel."
Knowledge of the "secret" visit was based on exclusive footage broadcast by Israel's Kann News, which first reported, "the commander of the American Central Command arrived for the first time to Israel, and met with senior security officials, including the Chief of Staff."
No doubt the potential for what weapons experts have commonly described as the "exceptionally advanced" Russian-supplied S-300 in Israel's backyard is making Tel Aviv and its allies nervous. Israel has repeatedly called delivery of the S-300s a "red line" for which it would act, however, plans for just such a scenario could be hastening.
Early Monday morning Israel's Channel 10 senior diplomatic correspondent broke the following, subsequently confirmed in the Times of Israel and Reuters:

Russian newspaper Kommersant reports that Russia might deliver S-300 anti aircraft missiles to Syria in the very near future in order to defend Damascus & Strategic Syrian army bases from Israel & U.S. airstrikes.
Kommersant reported Russia will give the S-300 missiles to Syria for free from Russian army supplies as part of its military assistance to Syria. This way the delivery could be done very quickly.
Russian military sources said parts of the S-300 will be delivered soon to Syria via cargo planes or Russian navy ships. Until Syrian officers will be trained to operate the system it will be operated by Russian military experts in coordination with the Syrian army.
According to Kommersant Russia believes that delivering the system will stabilize the situation in Syria and deter Israel and the U.S. from continuing its airstrikes in Syria. Russian sources said that if Israel attacks the missiles the results would be catastrophic.

Though still being hotly debated and contested among analysts, Syria's over 30-year old current deterrent system appears to have performed well, likely stunning the West and neighboring Israel (which itself played a part in the coalition attack) as it reportedly shot down 71 of the 103 cruise missiles, according to official Russian and Syrian government sources.
As we previously described, Pentagon officials have vehemently denied that their “nice and new and smart” cruise missiles were actually shot down, and Russia now further claims to be in possession of at least two non-detonated coalition missiles. Most Western media reports continue to assert that Syrian missile defense failed to shoot down a single inbound missile. Notably, the Pentagon has been careful in all statements to say Russia's S-300 system (currently present aboard Russian battleships in the Mediterranean) did not engage.
However, there are other possibilities that the coalition's missiles simply failed in reaching their targets in some instances without intercept by Syrian defenses, or even that advanced Russian air defense Electronic Counter Measures (ECM) may have been in play.
But one doesn't need to take the Russian Defense Ministry's word for it. It is entirely possible and even likely that Russian intercept claims are inflated, yet that there were a number of intercepts that night was also reported by several important outside sources, including by Syrian pro-rebel media, foremost being the Syrian Observatory for Human Rights (SOHR), which has for years been a chief go-to source for all mainstream reporting on Syria (though ironically when SOHR contradicts the mainstream media, such as in this case, its numbers are ignored).
SOHR reported, based on "several intersected sources" on the ground, that "the number of missiles that were downed exceeded 65." That anti-Assad/anti-Russia pro-rebel SOHR is saying this is hugely significant, and is consistent with Russia's claim.
But all of this will perhaps quickly become a moot point if Russia does indeed deliver the S-300 system to Syria after warning immediately on the heels of the US-led strike, that there would be consequences.
On the very morning after the US strike took place, Russia’s first deputy chief of staff, Sergei Rudskoi, said Russia would “reconsider” whether to supply the air defenses to Assad - an issue previously thought dead as Israeli Prime Minister Benjamin Netanyahu had reportedly successfully lobbied President Putin against the possibility in 2013.
Netanyahu was quoted at the time as saying of the S-300 system, "We’ll destroy your missiles if you deliver them to Assad" - a warning which has recently been repeated in the form of an Israeli "red line". However, Russian military sources have this week been quoted in the Times of Israel as saying: if Israel tried to destroy the anti-aircraft batteries—as analysts have indicated Israel likely would—it would be “catastrophic for all sides.”
But on Monday, Reuters reported that no decision had been made on S-300 delivery to Syria, citing Foreign Minister Sergei Lavrov, who said, "We'll have to wait to see what specific decisions the Russian leadership and representatives of Syria will take." Lavrov added, "There is probably no secret about this and it can all be announced (if a decision is taken)."
However, given Israel's past history of "strike first" in Syria and negotiate later, we could witness missiles flying before any official announcement takes place.