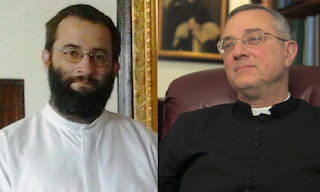 After reading an early edition of Fr. Chazal's updated attack on Sedevacantism and the writings of Fr. Anthony Cekada, I formulated 6 questions that came to mind when reading over the new text. My questions to him are immediately below and his response is below that. Of course, I am not a trained theologian....heck, I don't even have my accounting degree!

The board is set...the pieces are moving..............I would like to hear comments on this from ALL sides. Submissions welcome!

I admit that I have not read the second part of your essay yet. However, I do have questions about the position that it outlines.
1) Personally, I think after reading on this issue and considering what I have published on my blog from Fr. Kramer, that public heresy alone qualifies for defection from the Church and for loss of office. How can you be a heretic —— publicly reject the faith and yet be part of the Church founded on the Faith? Also, how can you hold office in a Church that you are not a part of. Are we trying to jam the square peg into the round hole no matter what this does to Catholic doctrine?
2) How is your argument — part of which I have viewed on Youtube — different form the Cassiacum thesis of Guerard des Lauriers — who definitely embraced sedevacantism and hence was thrown out of Econe.
3) How does all this “admonition” talk help your Resistance position AT ALL? Why do I say this? Have not the Vatican II popes been admonished for the past 50 years by traditionalists about their departure from the faith. From the Ottaviani intervention to the 1974 declaration to, more recently, the Dubia and the Fraternal Correction? Are an infinite number of admonitions necessary until we can make some judgments about the possession or lack of possession of office by these men?
4) Also, if you say that after all of these admonitions then a Council of some sort of Cardinals/Bishops can depose a pope, how does this differ from Conciliarism? No one can judge the Roman See.
5) Your statement that you will NEVER judge the Roman See to be vacant, throws into question your entire endeavor. Why bother taking about “admonitions” and “Church judgements” when NOTHING will alter your stance. You yourself on a Youtube video — something that I have never done — declared Francis a public heretic, and rather than saying, “he has lost the exalted office of the papacy,” you said that he “cannot exercise the office of the papacy” — or words to that effect. So you have shut down the office of the papacy to accommodate the foibles of Francis. This would mean that the jaws of Hell have triumphed over the Church — which they cannot.
6) If the eccentric theory of John of St. Thomas is set aside — that they pope has the papacy but cannot exercise the office — then we are left with Francis, with full possession of the papal office, who you say must not be obeyed lest you be led to perdition.
Now I go on to read the second half of your paper. I think that pure unadulterated truth is the only thing which will clear out all of our difficulties. During Sexagesima let us hope for “the Flood”!
Yours, Peter

Let us hope you can bear with me.
I found your remarks interesting.
1) Tertium datur. For instance canon 2264 conceedes valid jurisdiction to heretics, (who are latae sententiae excommunicated), while it is at once illicit to use it, until they are issued a declaratory or condematory sentence. Look it up and it is also quoted in the second part of my booklet. It was a famous principle under Benedict XIV in jansenist times.

There are plenty of other supporting arguments that i have listed, and if you would care to reply to them i would certainly be glad.
2) Guerard used the wrong distinction. I stated that in my booklet in the conclusion i wish you to read. Conciliar popes (Not just pope Francis, but others, and especially Benedict, and i want to be abundantly clear about that!) defect per se from office, and in this i totally concurr with Fr Kramer. Yet the Church remains a juridical and public society, who, even in normal times, takes time to catch up with heretical delinquents.
Too many people having not caught up with the heresies of Benedict, is the proof of a need to declare heresies.
3) The Archbishop was painfully aware of the insufficient weight of his admonitions... a total far cry from the Council of Vienna assembled against Paschal II. So many times he wondered why he was the last one standing with Bishop Castro de Mayer...
Perhaps i am not addressing this objection sufficiently in my book and will make the necessary correction.
The so called "filial" correction is a poisonned syringe, since the footnotes invoke Vatican II as a remedy. It does not qualify as a monition and was corwarly withdrawn by Burke, himself a modernist, who said he desisted, although i like the title.
Lacking a sufficient critical mass, the desultory admonitions have clearly lacked to both notify the whole Church conciliar popes are heretics and to threaten them from their entrenched position in the state apparel and dicasteries of Rome.
Moreover, summons and monitions are not the oly solution. there remains the possibility of 1. conversion, 2. divine intervention, 3.Putin s tanks rolling into Rome, or Saracens doing some clean up etc.
4) No, we are not conciliarists. Even the council of Constance, and i am grateful to Fr Kramer for pointing that out, merely declared the already per se fact of the defection of Benedict XIII. Yet who can deny it is Constance who blew Pedro de Luna to pieces...
Our position must respect the immunity of the Pope, and i really think it does.
The duty to separate from heretics is what stems actually directly and explicitly from Divile Law: Titus III,10. Moreover it is the office of bishops to declare heresy, that creates a dispositive cause, ie e.g. if all catholics began to ignore what Francis does, that would make him lose his position.
Now the Decree of Gratian equates in Canon Law the Sentences of Peter Lombard in Theology, says Cance. Similarly, the DTC indicates that the Canon"si Papa" ruled the entire jurisprudence of the middle ages on that question. The DTC is otherwise critical of Gratian, but not here at all.
Granted, conciliarism introduced an imbalance, but we can t accuse XII &XIIIth century unanimous canonists of conciliarism.
The Canon"si Papa" IS in fact THE canon that states papal immunity in Gratian s Concordantia. Yet Gratian did not put the necessary qualifiers in the case of heresy. Wish he did.
5) I never said i shall never say the roman see is vacant, but I said i shall never be a sedevacantist. Quite different. Do you want me to become a sedevacantist? If i ever say one day there is nobody on the See, it shall never be on account of that flawed principle of theirs, which states that facts alone account for loss of office, and it is left to the individual believer to ascertain these facts and the correlative loss. No, i can't accept this principle, it is anarchy, and we can only see it too well in the multitude of sede contraptions, their constant variations and their vulnerability to other errors.
I don't understand you saying i shut down the office of the papacy to accomodate the errors of Francis, please elaborate. I guarantee you, it is much worse to burn in hell as pope than as a charlatan, or as a usurper.
6) It seems you reject John of St Thomas outright. John of St Thomas s position was followed by the Dominicans, even today s Avrille Dominicans, who published the first french translation in the Sel de la Terre. (it is indeed Fr Pierre Marie who acquainted me with the text and convinced me about it).
It is a well known position, even acknowledged by the opposite jesuit school.
It is nothing less than a defense of the position of Cajetan, that Bellarmine disagrees with in his de Romano Pontifice.
Like the molinist and and anti molinist position on grace, the Church allows both opinions. Hence even modern manuals constantly say theologians do not agree among each other on that question.
Most recently, Cardinal Journet, who is a very renowned theologian, said it made more sense than Bellarmine s, in his "l Eglise du Verbe Incarne"
In my opinion it does accomodate papal immunity, because its object is to maintain the viguor of the LINK established by Christ between the holder of office and the office of the papacy.
Not so eccentric if you ask me.
Tertium datur.
fc+