100 year old Counter Plan to Our Lady's Fatima Message of Her Universal Queenship Uncovered in Vatican Archives. These Declassified and Newly Uncovered Documents are Making Everything Clear! 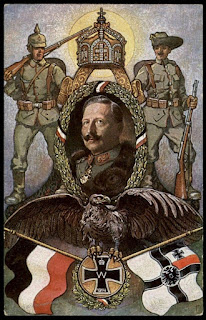 Here is a report from onepeterfive.com by Maike Hickson, dated May 11th of last year -- just recently brought to my notice --- which brings to light another document, in this case a letter from 1918, which reveals information circulating at the highest social, ecclesial, and political levels of Europe in which a plan by Grand Orient Freemasonry ---- facilitated by the American and French Republics --- would attack and destroy the primary institutions of Europe namely the "Throne and Altar." Dr. Hesemann is not a traditional Catholic and yet he is an honest historian who was given access to the Vatican Archives. Below is the content of the letter. It concerns information gotten by Kaiser Wilhelm II of Germany who wished to convey it to the Pope Benedict XV via Cardinal von Hartmann. Remember that Kaiser Wilhem II, "Kaiser Bill" in American historical mythology, was the one who dismissed Bismark from his post as Chancellor, thereby ending the Kulturkampf (Cultural War against the Catholic Church in Germany, was, also, a frequent visitor to Rome to visit Pope Leo XIII who the Kaiser very much admired, and was the oldest grandchild of Queen Victoria of Great Britain -- she actually dying in the Kaiser's arms in 1901.
Here we find the Masonic Counter-Plan to Our Lady's Proclamation of her Universal Queenship at Fatima and her requests to the Popes to Consecrate Russia to her Immaculate Heart. Below follows Maike Hickson's report:


The document which Dr. Hesemann found in the Vatican Archives files of the Apostolic Nunciature of Munich is a handwritten letter written on 8 November 1918 by the Archbishop of Cologne, Cardinal Felix von Hartmann, and addressed to the Apostolic Nuncio in Germany, Archbishop Eugenio Pacelli — who would later become Pope Pius XII. In that letter, Cardinal von Hartmann informed Archbishop Pacelli about some information that Emperor Wilhelm II just had received and which he wanted to pass on to the pope, with the help of his personal friend Cardinal von Hartmann. What follows are the most important excerpts of that historic letter:

Your Excellency,
His Majesty the Emperor just has let it be known to me “that, according to news that came to him yesterday, the Grand Orient has just decided first to depose all Sovereigns – first of all him, the Emperor – then to destroy (?) the Cathol.[olic] Church, to imprison the pope, etc and, finally, to establish on the ruins of the former bourgeois society a world republic under the leadership of  American Big Capital [Well, at least THAT did not happen!?]. The German Freemasons are purportedly loyal to the [German] Emperor (which is to be doubted!) and they informed him about it. Also England wants to preserve the current bourgeois order. France and America, however, are said to be under the full influence of the Grand Orient [Freemasonic Lodge]. Bolshevism is said to be the external tool to establish the desired conditions. In the face of such a great danger which threatens in addition to the Monarchy, also the Catholic Church; it is thus important that the German episcopacy be informed and that also the pope be warned.” So far the message of His Majesty. I have believed myself to be duty-bound to pass it on to Your Excellency, and I have to leave it up to Your judgment whether You wish to pass this message on to Rome. The stormy demand of the [German] Social Democrats that the Emperor should abdicate gives a certain confirmation to this message. May God protect us and His Holy Church in this terrible turmoil! [….] With utmost devotion and being at His Excellency’s disposal,  Cardinal Felix de [von] Hartmann.
(Source: A.S.V., Arch. Nunz. Monaco d.B. 342, fasc. 13, p. 95-96)