The Warren Report: What was Warren H. Carroll doing in Dallas in 1963? 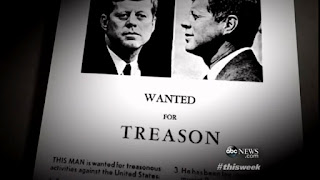 Here is some information on the various CIA related "conservative" organizations that were present and working in Dallas in 1963. Here we find "former" CIA man Warren H. Carroll right in the middle of the web. He worked for H. L. Hunt as writer. I must post H. L. Hunt's confession at the end of his  life concerning his involvement with the Kennedy assassination. As I have mentioned before, scripts from Warren Carroll, as chief propagandist for Howard Hunt in Dallas in 1963, on "Heroism" were found in the back seat of Jack Ruby's car after he shot Lee Harvey Oswald. Notice that Jack Ruby visited the home of Lamar Hunt, son of H.L. Hunt , 2 days before the assassination of JFK. Is it all just coincidence? Or perhaps there is more to Warren Hasty Carroll than meets the eye. Could all of it have NOTHING to do with the establishment of Triumph Magazine and Christendom College? Here is an account of the Warren Commission Testimony and Evidence below from Mae Brussell. I will paste pictures of the original letters below, along with the taped confession of Howard Hunt --- of Watergate fame and who, many believe, was one of the "Hobos" caught and then released after being captured at Dealey plaza on November 22, 1963.

I found this information on the YAF (Young Americans for Freedom, established by William F. Buckley) provided by Mae Brussell very interesting. Mr.Caddy of course gets a mention.