From the "It Just Does't Get Weirder than this" file: Author of the Catechism of the Catholic Church --- Vatican II Style, goes Weird. 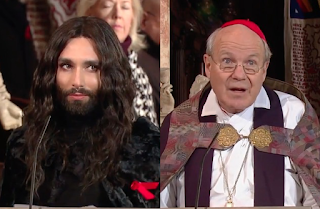 An excellent article sent to us by Randy Engel from Novusordowatch.org. Remember that Cardinal Schornborn is from the Communio "right-wing" of Conciliar Neo-Modernism. He wrote the Catechism of the Catholic Church approved of by John Paul II and has been one of the theologians most praised by both "wings" of the Conciliar Church. Apparently, he is also a darling of Opus Dei. So much for the Conciliar "right-wing" Neo-Modernism. If the following, again it comes to us from novusordowatch.org, does not cause you to physically and spiritually heave, I think you have lost "continuity" somewhere on the way: