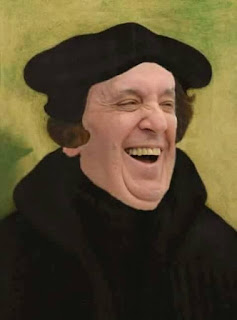 Francis notably spoke of the separation between Catholics and Lutherans caused by the Reformation in the past tense.

"We ... must look with love and honesty at our past, recognizing error and seeking forgiveness, for God alone is our judge," said the pontiff. "We ought to recognize with the same honesty and love that our division distanced us from the primordial intuition of God's people, who naturally yearn to be one." [Dr. Chojnowski: Clearly, this, for Francis, is the real faith. It is all a matter of group spiritual psychology -- not definitive Divine Revelation]


Francis’ comments on Martin Luther in an interview in June 2016, “I think the intentions of Martin Luther were not mistaken. He was a reformer. Perhaps some methods were not correct. But ...in that time, the Church was not a model to imitate. There was corruption in the Church, there was worldliness, attachment to money, to power…and this he protested. Then he was intelligent and took some steps forward justifying, and because he did this...TODAY LUTHERANS AND CATHOLICS, PROTESTANTS, ALL OF US AGREE ON THE DOCTRINE OF JUSTIFICATION. ON THIS POINT, WHICH IS VERY IMPORTANT, HE DID NOT ERR. HE MADE A MEDICINE FOR THE CHURCH.


October 13, 2016, Statute of Martin Luther provided over a joint Vatican meeting with Lutherans: Francis was presented with a huge leatherbound edition of Luther’s 95 Thesis. On October 13, 2016, Pope Francis did not offer one single word in public to honor Our Lady of Fatima. Instead, he chose to receive on that very day 1,000 Lutherans in Paul VI Hall at the Vatican.

For the event, he ordered that a statue of Martin Luther be erected on the stage in a place of preeminence so that it could preside over the meeting.

Next, he received from the Lutherans a bound copy of the 95 theses with which the heresiarch started his revolt.

During the meeting he wore two scarves on his neck, one yellow, symbolizing the Papacy, and one light blue, representing Lutheranism, The two were tied together to signify the union between the Conciliar Church and the Protestant heresy.

Referring to Luther, Francis said: "The Church's greatest reformers are the saints, in other words the men and women who follow the Word of the Lord and practice it. This is the path we need to take, this is what reforms the church and they are great reformers. They may not be theologians, they may not have studied, they may be humble, but these people's soul is steeped in the Gospel, it's full of it and they are the ones who successfully reform the Church. Both in the Lutheran and Catholic Churches there are saints, men and women with a holy heart who follow the Gospel: they are the Church's reformers [e.g., Martin Luther]."

Aren't these words - spoken in the context of this ceremony to honor the heresiarch - an implicit canonization of Luther?