"The Apostasy in the Church will come from the very top." Accept the heresies of Vatican II and the New Theology or you cannot be a part of the Catholic Church. 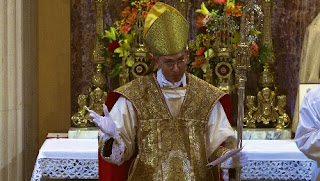 Just for a reminder about the reality of our situation during this time of the Third Secret in which "the apostasy in the Church will come from the very top." The record from the Vatican has continued to play the same song since Paul VI tried to pressure Archbishop Lefebvre to accept the New Mass and the teachings of Vatican II. "Accept the teachings of the Vatican Council and my own new teachings or you cannot be part of the Catholic Church." The same was said to Bishop Fellay by Benedict XVI in 2005. I have personal knowledge of this. What kind of "church" demands that you accept heretical doctrines and heretical theologians in order to be a member of it. Certainly not the Catholic Church.

The letter was revealed during a conference held on 16 September at the Priory of St. Louis-Marie Grignon de Monfort in France, by Mgr. Bernard Tissier de Mallerais, one of the Fraternity’s four bishops, who is renowned for his disapproval of an agreement with Rome.

During the conference, the prelate said: “On 30 June 2012 – this is a secret but will be revealed to the public – the Pope himself wrote a letter to our Superior General, Mgr. Fellay: “I confirm to you that in order to be fully reintegrated into the Catholic Church, you must really accept the Second Vatican Council and the post-conciliar teachings.”

“This really is a sticking point – Tissier de Mallerais said – because we cannot accept or sign something like this. Clarifications can be made as the Council is so vast and it does have its positive points but this is not the essential element of the Council.”

The Lefebvrian bishop was very tough in some of the points he made during the conference: “Weapons cannot be surrendered right in the middle of a battle; we will not look for a truce while the war rages on, with the beatification of a fake beatification, that of Pope John Paul II. This was fake, it was a fake beatification. And with the requirement, continuously stressed by Benedict XVI, that we accept the Council and the reforms to the post-conciliar teachings.”

Tissier de Mallerais also said that “the collegiality that destroys the power of the Pope who no longer dares to show resistance to the bishops’ conferences.”

He added that ecumenism “allows respect for the values of salvation of false religions and Protestantism, of false things,” while religious freedom “allows the free construction of mosques in our countries.”

“Evidently – the Lefebvrian bishop said – we cannot sign such an agreement. There isn’t and never will be agreement over this point.”

Despite “modernist Rome’s” insistence, Tissier stressed: “Personally I will never sign anything like this that is for sure. I will never accept that the new Mass is legitimate or licit; I believe it lacks validity, as Mgr. Lefebvre used to say. I will never accept the idea that “the Council, if interpreted correctly, could be made to correspond with the Tradition [and that] an acceptable meaning could be found.”

After calling the doctrinal preamble which Cardinal William Levada delivered to Fellay, “false”, the Lefebvrian bishop said some “very mild and soft” decisions were taken at the General Chapter of the Society of St. Pius X, convened last July, so as to “present Rome with such great obstacles that it would be prevented from making any new proposals to us. But the Devil is evil and I think they will strike again, so I am discreetly preparing to defend us and the Fraternity will defend itself.”