One Month to Go Before the 100th Anniversary of the Greatest Miracle of the Modern Period: Cornelia Ferreira's Letter on the September Apparition in 1917

- September 08, 2017
A MESSAGE FROM DR. CHOJNOWSKI: One thing strikes me when reading the account of the September apparition and seeing the picture below of a man carrying the almost angelic Jacinta through the crowds. What was it all about, really? Why the excitement, expectation, and deeply manifested faith? Why the surging crowds around the children? Why the threat to their lives by the Masonic authority? What was it all about? What about the Miracle in October in which you have the scoffers on their knees before the apocalyptic vision of the Dancing Sun --- weeping in joy at their new found  faith and weeping in regret at their own SCEPTICISM? Why such a grand display and convergence of the natural and supernatural, of the Mother of God and man? In order to impress the world with the fact that some 60 years later there would be an unsuccessful attempt on the life of JPII by a Turkish operative of the Gray Wolves; an attempt that produced no lasting effects either on JPII or on the Catholic Church as a whole. Nothing. Was this why the Mother of God "packed such a punch"? Or was it about the Mother of God trying to strengthen the Catholic Faith of the people and demonstrating the real power of God before prelates in the Church who would soon lead the MASS OF THE CATHOLIC FAITHFUL INTO APOSTASY. AN APOSTASY THAT WOULD COME FROM THE PLACE WHERE ONLY FAITH AND UNSWERVING FIDELITY WERE SUPPOSED TO RESIDE.

You decide ----- and DON'T send money!
Now for the news letter and the simple truth of the Message of Fatima:

The Account of the Apparition to the Children at Fatima on September 13, 1917
As the hour approached, I [Lucia] set out with
Jacinta and Francisco, but owing to the crowds
around us we could only advance with difficulty.

The roads were packed with people, and
everyone wanted to see us and speak to us. There
was no human respect whatsoever. Simple folk,
and even ladies and gentlemen, struggled to
break through the crowd that pressed around us.

No sooner had they reached us than they threw
themselves on their knees before us, begging us
to place their petitions before Our Lady.
Others who could not get close to us shouted
from a distance: “For the love of God, ask Our
Lady to cure my son who is a cripple!”

Yet another cried out: “And to cure mine who is
blind!... To cure mine who is deaf!... To bring
back my husband, my son, who has gone to the
war!... To convert a sinner!... To give me back my
health as I have tuberculosis!” and so on.

All the afflictions of poor humanity were
assembled there. Some climbed up to the tops of
trees and walls to see us go by, and shouted
down to us. Saying yes to some, giving a hand to
others and helping them up from the dusty
ground, we managed to move forward, thanks to
some gentlemen who went ahead and opened a
passage for us through the multitude.

Now, when I read in the New Testament about
those enchanting scenes of Our Lord’s passing
through Palestine, I think of those which Our
Lord allowed me to witness, while yet a child, on
the poor roads and lanes from Aljustrel to Fatima
and on to the Cova da Iria! I give thanks to God,
offering Him the faith of our good Portuguese
people, and I think: “If these people so
humbled themselves before three poor
children, just because they were mercifully
granted the grace to speak to the Mother of
God, what would they not do if they saw Our
Lord Himself in person before them?”
Well, none of this was called for here! It was a
distraction of my pen, leading me away where
I did not mean to go. But, never mind! It’s just
another useless digression. I am not tearing it
out, so as not to spoil the notebook.
At last, we arrived at the Cova da Iria, and on
reaching the holm oak we began to say the
Rosary with the people. Shortly afterwards, we
saw the flash of light, and then Our Lady
appeared on the holm oak.

“Continue to pray the Rosary in order to obtain
the end of the war. In October Our Lord will
come, as well as Our Lady of Dolours and Our
Lady of Carmel. Saint Joseph will appear with
the Child Jesus to bless the world.
“God is pleased with your sacrifices. He does not
want you to sleep with the rope on, but only to
wear it during the daytime.”
“I was told to ask you many things, the cure of
some sick people, of a deaf-mute….”
“Yes, I will cure some, but not others. In October
I will perform a miracle so that all may believe.”
Then Our Lady began to rise as usual, and
disappeared. 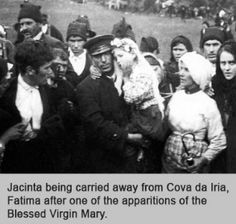