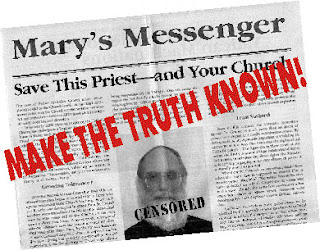 September: Month of Our Lady of Sorrows

Dear Devotee of Our Lady of Fatima,
By now most of you may have received communications from the National Committee for the National Pilgrim Virgin of Canada -­‐-­‐ its Board of Directors, Committee of Priests and managers headquartered in Fort Erie, Ontario, Canada. These letters contain unsubstantiated allegations supporting their reasons for severing ties with the Servants of Jesus and Mary, Inc. They give the false impression that some of the directors of SJM have taken a new direction, and that Father Gruner only used this apostolate to mail and receive mail for his apostolate (NPV) in Canada.
The devotees of Our Lady of Fatima should know of the Servants of Jesus and Mary’s incorporation in 1978 under the direction of Father Michael Jarecki. Father served as a spiritual director to men and women wishing to live a holy life of prayer, and adhering to the total Fatima message. In the early 1980’s Father Michael introduced the members of the Servants to Father Gruner, and these members then began volunteering to help Father with his work of putting out the Fatima Crusader. In 1988 Father Gruner asked to use the name of this spiritual apostolate to do his work in the United States. On August 10, 1988, David Lamica (an original Servant of Jesus and Mary) signed as the incorporator to do Father Gruner’s work in the United States. Thus, SJM apostolate agreed to collaborate with Father Gruner’s apostolic work for Our Lady of Fatima, remaining an independent corporate entity, and never becoming a subsidiary of the National Committee for the National Pilgrim Virgin of Canada or any other corporation.
The mission of the Servants of Jesus and Mary was set forth in its by-­‐laws, and was not set up only to receive and process mail.  Article II of the Servants of Jesus and Mary by-­‐laws states that the purpose  for  which  SJM  was  incorporated,  and  has  continued  to  be  its  purpose,  is  to  spread  and promote knowledge of and obedience to the message of Our Lady of Fatima and related matters; and       to promote the spiritual, intellectual and apostolic formation of workers for the  message  of  Fatima throughout the United States and the world.
Father Gruner never went forward with any important decision without first obtaining the approval of both the NPV and SJM Boards. His closest advisers were Father Michael Jarecki and Father Victor Soroka (both directors on the SJM Board). This created a checks-­‐and-­‐balances relationship between the two, with Father Gruner being the President of both boards, acting as mediator.  Employees of SJM and vendors paid by SJM were definitely involved in the production of the Fatima Center literature.
After Father Gruner’s death on April 29, 2015, the board of SJM stressed the importance of finding a priest to serve as the head of the Fatima Center which encompassed both boards. This has been SJM’s main concern for the apostolate, and after two years of not acting upon our request, SJM choose to place Father Paul Kramer, on May 1, 2017, as President of SJM , thus fulfilling our mission to have a priest as the head of our corporation.


The Servants of Jesus and Mary's mission is to continue to promote the Fatima message under the direction and leadership of Father Paul Kramer whose work and collaboration with Father Gruner, and devotion to the Fatima message, spanned a 30-­‐year period.  We are committed to promoting, for the salvation of souls, the  whole truth  about Fatima and devotion to the Immaculate Heart of Mary.   We    will use all means, including spiritual, apostolic and educational, to foster, encourage and promote to        an even greater  degree,  among  devotees  of  Our  Lady  of  Fatima,  the  knowledge  and  practice  of  the Fatima  message.
Our immediate plans include:
·        To promote authors’ books and literature that reflect our Fatima Mission and Catholic Faith
·        To educate men and women throughout the world on the Fatima message through direct teaching, published works and any means of mass communication.
·        To continue petitioning the Pope for the consecration of Russia to the Immaculate Heart of Mary
·        To continue petitioning the Pope to reveal the Third Secret of Fatima
·        To offer prayers and Masses for the intention of our donors, and the revealing of the Third Secret of Fatima
·        To continue our volunteer program that makes rosaries and scapulars sent throughout the world
·        To continue the sale of religious items and books
·        To offer, in time, pilgrimages to Fatima and other religious sites
The truth of our beginnings, as a spiritual group of men and women striving to follow the Fatima Message, has never been altered and we pray our long-­‐time devotees of Our Lady’s apostolate will continue to support our work and know that they have aided Our Lady in achieving her final triumph.
In the Sacred and Immaculate Hearts, Servants of Jesus and Mary Board: Father Paul Kramer – President
Ellen Montgomery (an original Servant of Jesus and Mary), David Skelton, and Tom Massett
P.S. Presently we are designing a web site that will serve as a venue for our donors to ask and receive answers to any questions regarding SJM’s apostolate.