- August 01, 2017
Is Jesus Christ a threat to the Liberal System? Archbishop Lefebvre said He was. That is because Christ as both Creator, Redeemer and King has an absolute claim over all that is human --- including the human constitutions of states. One of the things which attracted so many, myself included to the writings and thought of Archbishop Marcel Lefebvre was his fearless application of the principles of the Catholic Church and the doctrine of the Social Kingship of Christ to the political, economic, social, and historical problems of our own day and age. His fearless engagement with social and political ideas --- no matter how controversial they may have been at the time, was definitely the Catholic militancy that so many of us were looking for after the Revolution had devastated our Christian Civilization and the institutional organization of the Catholic Church in the 60s, 70s, 80s, 90s, and into the 21st century. What should we fight for ---- ON ALL FRONTS --- the Archbishop gave us an answer and identified our fellow counter-revolutionaries who had fought the same good fight in history.

Note also, the following quotation is from a book on the spiritual life! 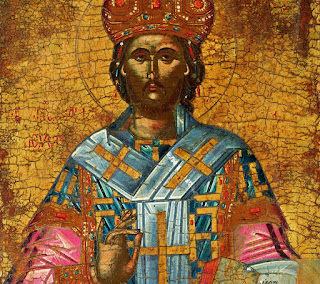 "But we see that as soon as Jesus appeared here below, the great ones of this world began to worry. If Jesus Christ is King, is He not a threat to our authority, to our power, to our own kingdoms? Yes, indeed. He IS A THREAT to the princes of this world if the princes [i.e., governments] do not submit to His laws, for He is the King of kings. But we sing it on Christmas night: 'The kings of the earth and the princes have risen up against God and against His Christ?" (Ps. 2:2). And God knows that history would only confirm the truth of that verse of Scripture.
Is it possible that men rise up against Him who wants only to redeem them; against Him who comes only to bring them life; against Him who comes only to shed His blood in order to give them eternal life?
Alas! We can see it all around us. Where today are the princes [i.e., world leaders] of the nations who kneel before the Eucharist? Where are those who come to kneel before the infant Jesus? How painful it is to think that after 2,000 years of Christianity, of preaching of the Gospel, the word of Scripture is still just as true: "The kings of the earth and the princes have risen up against God and against His Christ"
Satan came to trouble this reign of Our Lord and not only trouble it, but his goal was utterly to destroy it. That is exactly what Pope Leo XIII says in his encyclical Humanum Genus, talking about Freemasonry. He says that their goal is the total destruction of Christian institutions. And, indeed, patiently resolutely, year by year, with consummate malice, they are little by little reaching their goal.
The great means of achieving the destruction of Christian institutions and of the reign of Our Lord is Laicism and the secularization of States, of societies --- and by the very fact the secularization, the laicization of families; it has to be a logical consequence; we might say that it is inevitable. And not only families, but seminaries, the clergy. Within the Church herself we have clerics speaking out if favor of secularization.
Vatican II, by its decree on religious liberty, practically establishes laicization and not officially admits non-confessional States and secularized States. So that Our Lord Jesus Christ might no longer reign in society. At most, He may reign in souls, in individuals, in families, in parishes, but no longer in society --- it's now possible. I have heard it all with own years. The reign of Our Lord in society is no longer possible.
That is not what Pope Pius XI said in his encyclical Quas Primas on the social kingship of Our Lord Jesus Christ. What a magnificent encyclical! We need to read it and re-read it often in order to realize what our duty is, the duty of priests, in favor of the social reign of Our Lord Jesus Christ,
Now we are seeing the de-Christianization of all Catholic societies, at the instigation of the Council and this decree on religious liberty, being carried out not just with the permission of Rome, but with the approval and at the instigation of Rome.
All of the reforms which were made after the Council were made with a view to the secularization and the laicization of Catholic society. It is a crime against Our Lord Jesus Christ. That is the situation we are in today....One of the most painful things we have to be aware of today is precisely that OFFICIAL NEGATION OF THE SOCIAL KINGSHIP OF OUR LORD JESUS CHRIST. People no longer want Our Lord to reign over societies. It is even written into the transformation of the liturgy. They removed from the hymn of Our Lord Jesus Christ the king of two stanzas that speak of the reign of Our Lord Jesus Christ over the family and over society. And why is that? Are we Catholics going to start denying the reign of Our Lord Jesus Christ over our families and over societies? WE WOULD BE TRAITORS! WE WOULD BE APOSTATES!"
Cited in The Spiritual Life, pp. 102-105. STAS Editions, 2014.