- July 11, 2017
Just in time for the anniversary of the giving of the Third Secret  by Our Lady to the Three Children of Fatima, the website Tradition in Action has come forward with a text, subsequently verified for its authenticity by a expert handwriting analyst --- based upon Sister Lucy's writing out of the First and Second Secrets, which we know to be authentic --- which claims to be that of the Third Secret --- dealing with the apostasy in the Church.
This is an incredible find, if it proves to be authentic. It clearly speaks of an antipope and an counterfeit church. It also speaks of the importance which Fatima would have for the faithful Catholic in the 20th and 21st centuries.
It is interesting that "church of hell" seemingly described by Sister Lucy should almost exactly resemble the new church built at the Shrine of Fatima.

This also fits in perfectly well with what Fr. Nicholas Gruner always told me in private with regard to the Third Secret, he would always repeat the words of Cardinal Ciappi, who had actually seen the text of the Third Secret, that "the Apostasy in the Church will come from the very top." 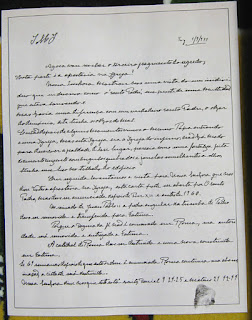 Here is TIA translation of the text. The entire article can be accessed at the web address above.

Now I am going to reveal the third fragment of the secret: This part is the apostasy in the Church!

Our Lady showed us the individual who I describe as the 'holy Father' in front of a multitude that was cheering him.

But there was a difference from a true holy Father, his devilish gaze, this one had the gaze of evil.

Then, after some moments we saw the same Pope entering a Church, but this Church was the Church of hell; there is no way to describe the ugliness of that place. It looked like a gray cement fortress with broken angles and windows similar to eyes; it had a beak in the roof of the building.

Next, we raised our eyes to Our Lady who said to us: You saw the apostasy in the Church; this letter can be opened by the holy Father, but it must be announced after Pius XII and before 1960.

In the kingdom of John Paul II the cornerstone of Peter's grave must be removed and transferred to Fatima.

Because the dogma of the faith is not conserved in Rome, its authority will be removed and delivered to Fatima.

The cathedral of Rome must be destroyed and a new one built in Fatima.

If 69 weeks after this order is announced, Rome continues its abomination, the city will be destroyed.