- July 21, 2017
On Wednesday, July 19, Dr. Peter Chojnowski kindly published on his blog a brief article that I wrote entitled:
Diocesan priest questions validity of BXVI’s resignation
The “diocesan priest” in this instance is Fr. Ray Blake, who writing on his own blog from the Diocese of Arundel & Brighton in southern England, had floated a theory about the resignation of Benedict XVI that caught my attention. (Please, click on the hyperlink to visit Father’s blog if you wish to read his complete post).
You see, Fr. Blake posited that a “key factor” in Benedict’s resignation “was the threat that his brother George might be implicated not only in the physical abuse but also in the sexual abuse of school pupils.”
Fr. Blake went on to say that even if the implications were untrue, such a thing would have placed Benedict in an “untenable situation” had he remained in the papacy.
Simple enough, right?
Even so, let’s recap:
According to Fr. Blake’s theory, a “threat” (from unnamed wolves) against his brother was a “key factor” in Benedict’s decision to flee.
Since then – more than four years later – Fr. George Ratzinger hasn’t been implicated in any such scandal.
That being so, if one grants that Fr. Blake’s theory is correct (and it’s as reasonable as any other), one would then be left to logically conclude that the threat has been averted in light of the resignation.
Again, there’s nothing terribly complicated about Fr. Blake’s theory, but he went even further by suggesting that “pressure from groups like St Gallen mafia and Cardinal Martini” may have also been a factor in the resignation.
At this, I trust that readers can see why Fr. Blake’s post caught my eye.
As I pointed out in my article, the Code of Canon Law is unambiguous in the matter of papal resignations, stating:

“If it happens that the Roman Pontiff resigns his office, it is required for validity that the resignation is made freely and properly manifested but not that it is accepted by anyone.” (Canon 332 §2)
Now, you tell me folks, does a pope resigning in the face of a “threat” (Fr. Blake’s word) from unnamed sources against a loved one, and “pressure” (his word as well) from a self-described “mafia” group, add up to an act “freely made”?
Not to my mind.
As such, I concluded:

“Fr. Blake essentially opines that Benedict’s resignation may have been invalid – a theory that necessarily calls into question the validity of the conclave that followed, to say nothing of the heretic they elected…”
Well, Fr. Blake took great exception to my article; or as the British might say, he threw a bloody paddy over it in a follow-up post entitled simply, Francis is pope.
Please, do yourself a favor and read Father’s response in full. Trust me, the insults that he hurled about in this post alone are worth your time.
Getting to the meat of his rebuttal (of his own theory, mind you), Fr. Blake wrote:

“Very few of us act with absolute freedom; age, advice or pressure from others, fear or even threats might well influence our decisions but unless someone was physically forcing Benedict’s hand to write his name at the foot of his resignation, and pressed his seal to it amidst squeals of protestation, he did indeed act ‘freely’.”
Now, I’m no canon lawyer, and obviously neither is Fr. Blake, but I am willing to bet dollars to donuts (or pounds to crumpets, if you prefer) that his “gun-to-the-head” interpretation of Canon 332§2 is, shall we kindly say, quite a distance off the mark.
In any event, as readers can plainly see, Fr. Blake’s argument isn’t really with me, but with the Code of Canon Law.
Be that as it may, Fr. Blake indicated that he is expecting a correction to be issued in light of his argument, and so with a genuine sense of urgency, I am happy to oblige.
I concluded my article on Fr. Blake’s “theory” concerning Benedict’s resignation:

“I applaud Fr. Blake for his willingness to address this elephant in the room that most are pleased to ignore.”
In light this grave error in judgment, I humbly offer my apologies and ask that readers henceforth consider this statement well and truly retracted. 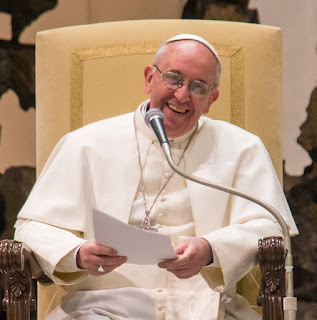