On the Day of the 60th Anniversary of Vatican II , we remember the Calumny Pronounced Against the Children of Fatima, proclaiming them "Prophets of Doom," and, also, remember Transcendental Thomism which is the Philosophical Basis of Vatican II. 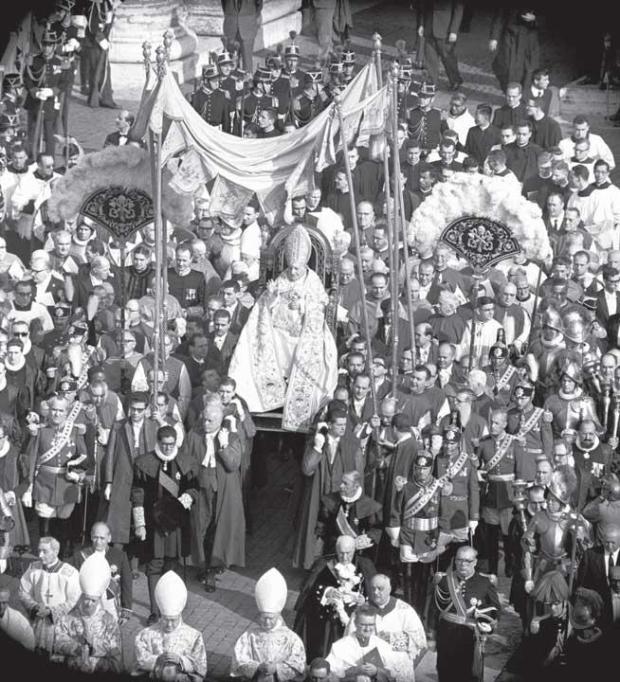 For this 60th anniversary of the beginning of Vatican II on October 11, 1962, we draw from Fr. Dominic Bourmaud's book One Hundred Years of Modernism: A Genealogy of the Principles of the Second Vatican Council (Kansas City, MO: Angelus Press, 2006), pp. 214-218, to identify the philosophical roots of Vatican II by citing the Transcendental Thomism of Karl Rahner. In this regard, Fr. Bourmaud speaks of the philosophical foundations of Rahner's Modernist theology by stating, "Rahner does not hide his sources. They are Kant and Heidegger but also Hegel...Rahner leans also on his Belgian colleague Fr. Marechal [one of the founders of Transcendental Thomism] in his attempt to build bridges between Kant and St. Thomas, thus beginning with immanentism and ending in realism. Rahner explains the process in his Innsbruck doctoral thesis....The thesis was rejected by Rahner's instructor but was published soon after." In the footnote, Fr. Bourmaud states, "Professor Honecker rejects the thesis on the grounds that it 'falsified St. Thomas Aquinas' teaching by crediting him with views he did not hold."
The key to Transcendental Thomism is its new modernist epistemology (theory of knowledge). Treating Rahner's epistemology, Bourmaud states, "In his treatment of the process of knowing, St. Thomas explains that the thing known is received according to the capacity of the knower. This is the principle which Rahner would invoke to justify his venture into Kantianism. Rahner adopted Kant's transcendental method whereby knowledge has two sources, both the human object and the process of knowing. The matter of knowledge comes from the object; the form of knowledge, on the contrary comes from the knower, or the knowing subject. Henceforth, reality is ruled by thinking and not thinking by reality; henceforth, thought bestows upon knowledge an essential structure, with the result that we can no long know the factual reality or being of a thing by only its appearance, or the phenomenon."
"To make matters worse, Rahner engaged in 'phenomenological reduction,' by which being and being known are one and the same reality: 'the intellect and the known and the knowing are the same.' [From Rahner's Spirit in the World. In Latin it is idem est intellectus et intellectum et intelligere.]" "Being in its in-self is being-known. [The known is always the being of the knower.' Knowing is the subjectivity of being itself." Also from Sprint in the World, see Rahner stating, "Every knowledge of another by man is a mode of his self-knowledge of his 'subjectivity': the two are not merely extrinsically synchronized but intrinsic moments of the one human knowing. Now this holds also for man's knowledge of God."
So the Modernist New Theology of Rahner and the others, in varying degrees, is based upon a completely non-Thomistic, non-Aristotelean, and, even, counterintuitive presentation of the relationship between the mind and its object in the created world. I have always thought it IMPOSSIBLE to strain traditional Catholic theology through the sieve of Kant's and Hegel's mind dominating epistemology. How do you get orthodox Catholic theology, for example concerning Transubstantiation, when you believe that the mind is either constructive of reality or the only reality in which the object has the only objectivity that it will ever have? How do you get a valid intention to confer the sacraments or offer the Holy Sacrifice of the Mass when you treat all objects as mere mental phenomena that may or may not have some tenuous relationship to the matter of the world. What matters for these philosophies is the mind, for it is the mind that gives form to its object. This does not fit in any way with traditional Catholic doctrine. To try to infuse Kant or Hegel or the phenomenology of Heidegger (one of my professors was actually a student of Heidegger --- who insisted that he had a complete copy of the Summa Theologiae on his book shelf when my professor went into his office) into Catholic Theology is to destroy it. This is the underlying philosophical reasons for Vatican II. The underlying theological reason is Jacques Maritain's claim that in Christ there were TWO acts of existence, one for his human self and one for his divine self. It was a Neo-Nestorianism. With this, he opened the door to the Modernists' distinction between the "Christ of History" and the "Christ of Faith." This is what we should be arguing about, not who allows and who does not allow the "Latin Mass." There is a deep philosophical difference between the true Catholic Mass and the Novus Ordo Missae. There was meant to be. Let the 60th anniversary of Vatican II be the occasion for us to admit that we have failed to defeat Modernism up to this point on a grand scale and commit to uprooting the evil by reaching down to the deep roots of the problem. And pulling them out. Ideas are that by which we know things, not that which we know. Questions?