- August 11, 2021
Dr. Chojnowski: When you think about the restrictive situation in which a Carmelite nun lives, you can say that the enemies of the Church would see this as one of the easiest venues from which to pull off a substitution. A substitution by one who would follow along with every single aspect of the doctrinal and liturgical revolution of NewChurch, along with one that would allow the redirection of the Fatima Message to focus upon an affirmation of the Modernist Revolution and the perpetrators of that Revolution. The change worked out perfectly for the perpetrators, it went without a hitch until Sister Lucy Truth decided that it must discover the truth of the matter using the latest scientific, medical, and forensic means available. Without Sister Lucy Truth the fraud would have remained in place, relegated to the individual intuitions of individuals who could see that there was something very different about these two women. The apparent conspiracy, would have succeeded without a hitch. If the Vatican could fool the entire world with this substitution, why could it not fool the relatives of Sister Lucy or quietly pressure them into silence or indifference. Fear of harm is a great motivating factor. Most people do not want their lives interrupted by unpleasant or dangerous situations which do not affect them directly. What about family members who had never actually seen the real Sister Lucy --- who apparently disappeared some 60 years ago. Even those who knew her and had actually seen her would eventually lose touch with her or the presence of the fake would blur a clear perception that a substitution did or might have taken place. Then there is the instinctive tendency --- perhaps still had by some, especially those who grew up before the Modernist Revolution in the 60s --- to believe what the "good priests" and "good bishops" and "good popes" are telling them about "Sister Lucy." The default position would be to believe them, since you cannot be sure that there is a problem due to the circumstances. Also, you had no direct access to Sister Lucy herself, except with express permission of the Vatican.
Listen, if the scientific evidence shows that there was a substitution, dating back at least to the early 60s or even to the late 50s, then the relatives who think otherwise are just wrong in their assessment. Many of them may have a story to tell but have not told it yet. That is the purpose for the on-going Sister Lucy Truth investigation, which is a very public enterprise. What is most surprising however is how few people care. That is probably the most shocking aspect of this whole investigation to me personally. The Messenger of Fatima was most likely taken out by her enemies in the Vatican and in Coimbra and in who knows where else, and replaced by another woman who assumed her identity. But, so what? You have to wonder about these people's interest in getting to the roots of the attempted taken down of the Catholic Church by her long term enemies. Hey man, this is a direct empirically analyzable piece of forensic evidence pointing to what happened, not only to Sister Lucy but to the Church at large. It is something that can be scientifically PROVEN, one way or another. It either IS OR IT IS NOT. The women appearing as "Sister Lucy" either are the same individual, have the same act of existence, OR THEY DON'T. Does it matter to Our Lady and Our Lord that the substitution be found out? How could it not? If true, it is a crime crying out to Heaven for vengeance. We remember Edmund Burke's words when, during the French Revolution but before the murder of the Queen of France, WHERE IS THE MUCH TOUTED FRENCH CHIVALRY? WHY DON'T THEY SAVE HER EVEN AT THE COST OF THEIR LIVES?  And the Messenger of Our Lady, can her misfortune be overlooked as if it is only of minor concern a mere attempt to get more "clicks" for this blog than Taylor Marshall or the Remnant? How petty and self-absorbed have we gotten? How unmanly have we become? If you do not like the way we have done it, or are dissatisfied with our "method," then publicly take up the question yourself and seek out the answers for the obvious questions. Otherwise, help us!
Same person?
Does it seem like the individual in the second picture is 20 YEARS OLDER than the one above? If the answer is NO to either question, we have a HUGE PROBLEM. 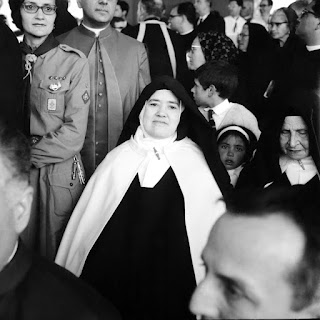