Silence in the Ratzinger Corner? Maybe because the Motu's drive for the Elimination of the Mass can be Traced to Josef Ratzinger's Rejection of the Catholic Theology of the Mass in His Critical Text, "Introduction to Christianity"? 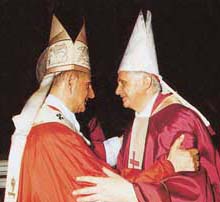 "Wonderful book, Josef! No more of that 'blood and guts stuff,' just "Total Self-Giving"!
From Josef Ratzinger's book, Introduction to Christianity, trans. J.R. Foster (New York: Herder and Herder, 1970), pp. 213-215.
From the chapter, "The Christological Articles of the Creed" and the subsection, "Suffered Under Pontius Pilate, Was Crucified, Dead and Buried": "What position is really occupied by the cross within faith in Jesus as the Christ....As we have already established, the universal Christian consciousness in this matter is extensively influenced by a much-coarsened version of St. Anselm's theology of atonement [Notice he only traces this back to the 11th century and not to the Deposit of the Faith]....To many Christians, and especially to those who only know the faith from a fair distance, it looks as if the cross is to be understood as part of a mechanism of injured and restored right. It is the form, so it seems, in which the infinitely offended righteousness of God was propitiated again by means of an infinite expiation. It thus appears to people as the expression of an attitude which insists on a precise balance between debit and credit; at the same time one gets the feeling that this balance is based nevertheless upon a fiction....The 'infinite expiation' on which God seems to insist thus moves into a doubly SINISTER light [emphasis mine]. Many devotional texts actually force one to think that Christian faith in the cross visualizes a God whose unrelenting righteousness DEMANDED A HUMAN SACRIFICE, the sacrifice of his own Son, and ONE TURNS AWAY IN HORROR from the righteousness whose SINISTER WRATH makes the message of love incredible [emphasis mine]....In the Bible the cross does not appear as part of a mechanism of injured right; on the contrary, in the Bible the cross is quite the reverse: it is the expression of the process in which one is what one does, and does what one is; it is the expression of a life that is completely being for others. To anyone who looks more closely, the scriptural theology of the cross represents a real revolution as compared with the notions of expiation and redemption entertained by non-Christian religions, though it certainly cannot be denied that in the later Christian consciousness [like in the Catholic Faith as defined by the Council of Trent!] this revolution was largely neutralized and in its whole scope seldom recognized....[Now Ratzinger begins speaking about St. Paul's Letter to the Hebrews] When our text says that Jesus accomplished the expiation through his BLOOD, this blood is again not to be understood as a MATERIAL GIFT, a quantitatively measurable means of expiation; it is simply the concrete expression of a love of which it is said that it extends 'to the end" (John 13:1)."
pp. 221-222, "Thus it should now also be plain that with the cross, it is not a matter of an accumulation of physical pain, as if its redemptive value consists in its involving the largest possible amount of physical torture. WHY SHOULD GOD TAKE PLEASURE IN THE SUFFERING OF HIS CREATURE, INDEED HIS OWN SON, or even see in it the currency with which reconciliation has to be purchased from him? The Bible and right Christian belief are far removed from such ideas....Basically this also answers the question with which we started, whether it is not an unworthy concept of God to imagine for oneself a God who demands the slaughter of his son to pacify his wrath. To such a question one can only reply, indeed God must not be thought of in this way. But in any case such a concept of God has nothing to do with the idea of God to be found in the New Testament."
Dr. Chojnowski: What better set of ideas to use to reject not only the entire Catholic theology of the Mass but even the entire Catholic theology of the Cross and the Redemption of Man? Glad we are just talking about Latin and embroidered copes!