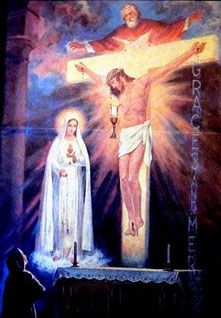 This account comes from Mark Fellows, Fatima in Twilight (Niagara Falls: Marmion Publications, 2003), pp. 48-49.
"Lucy had been transferred to the Dorothean novitiate at Tuy, a town on the northernmost border of Portugal and Spain in 1926. Two years later she made her first vows. The following summer, Thursday, June 13, 1929...Lucy was observing a holy hour in the chapel. Sometime between 11pm and midnight she knelt prostrate by the communion rails [think here of how the Fake Sister Lucy received communion from John Paul II at Fatima in 2000), and repeated the prayers the Angel of Peace taught her. [Lucia] recalls: 'Suddenly the whole chapel was illumined by a supernatural light, and above the altar appeared a cross of light, reading to the ceiling. In a brighter light on the upper part of the cross, could be seen the face of a man and His body as far as the waist. Upon His breast was a dove of light. Nailed to the cross the body of another man. A little below the waist I could see a Chalice and a large Host suspended in the air, onto which drops of Blood were falling from the face of Jesus crucified and from the wound in His side. These drops rand down onto the Host and felling into the Chalice. Beneath the right arm of the cross was Our Lady, and in Her hand was Her Immaculate Heart. It was Our Lady of Fatima, with Her Immaculate Heart in Her left hand, without sword or roses, but with a crown of thorns and flames [in other words, "her" Heart was in perfect union with His Heart --- as if it had one single identity]. Under the left arm of the cross, large letters, as if of crystal clear water which ran down upon the altar, formed these words: Grace and Mercy.'
Lucy beheld the vision in silence, 'I understood that it was the mystery of the Most Holy Trinity that was shown to me and I received lights about this mystery,' she said later, 'which I am not permitted to reveal [Can you imagine what those would be!].' According to Lucy, the Blessed Virgin said, 'The moment has come in which God asks the Holy Father [at the time Pope Pius XI], in union with all the bishops of the world, to make the consecration of Russia to My Immaculate Heart, promising to save it by this means. There are many souls whom the Justice of God condemns for sins committed against Me, that I have come to ask reparation: sacrifice yourself for this intention and pray.'"
Dr. Chojnowski: So this is an important day in the history of the Fatima Message and in the life of Sister Lucia dos Santos. Not only is she graced with a profoundly theological vision, which affirms all of the central tenets of the Catholic Faith and Religion, but the promise made to her on July 13, 1917 at Fatima, that She would return to ask for the Consecration of Russia, is fulfilled as promised. Just like her promise of the Miracle was fulfilled, at exactly the right time, on October 13, 1917. Pope Pius XI, most probably because he wanted to make a political and diplomatic arrangement with Soviet Russia through the Vatican's mediator the Third French Republic, the request, although delivered, was NEVER, accomplished. Remember, in this apparition it was requested 1) that the Pope consecrated Russia, that 2) he do this with all of the Catholic bishops of the world, and 3) that following this act the First Saturdays would be proclaimed by the Pope as the means to repair the insult and offense given to the Blessed Virgin Mary, through rejection or neglect of the doctrines about her unique and greatest titles and characteristics that make her "blessed amongst all women."
Obviously the Trinitarian, Eucharistic, and Marian Apparition at Tuy on June 13, 1929, was meant to unite the messages and the miracle given at Fatima to the most fundamental truths of the Catholic Faith. Where in here do you find the conversion to liberal democracy spoken of by the Imposter Sister Lucy during here interview with Carlos Evaristo in 1993? Where do you find the ecumenical apostasy concerning the nature of God and the way to salvation as this was promoted by the man, John Paul II, who was nearly worshipped by the Imposter Sister Lucy and who, conveniently made himself the topic of the Third Secret.
The real woman, who had miraculously seen portrayed the most profound and fundamental truths of the real Catholic faith, had to be really eliminated by those who wanted these politically and theologically incorrect teachings and realities to disappear from man's mental horizons. Remember, also, how Cardinal Ratzinger tried to say that this vision ["Fatima II"] was just Sister Lucy taking images and ideas from pious books of devotion. Face it, the real Fatima had to be gotten rid of and replaced with a fraud that fit perfectly wit the apostasy of the Modernists who took over the Vatican. Why is this hard?