Showing posts from June, 2021
Show all

On the Vigil of Sts. Peter and Paul, we remember St. Irenaeus whose Struggle Against the Gnostic Heretics and His Upholding of the Roman Papal Chair as the Guarantee of Truth and Orthodoxy is More Relevant than Ever Before. What don't "Catholics" Get about This?

Feast June 28th, the Vigil of the Great Roman Feast of Sts. Peter and Paul From the St. Andrews Missal (1954): "Towards the end of the second century [n.b.] when gnostic sects endeavored to undermine the basis of the Christian religion, God raised up St. Irenaeus and 'granted him the grace to destroy the heresies by the truth of his doctrine.' St. Irenaeus, succeeding to the See of Lyons in 177,  declared that, 'every church must be in agreement with the Church of Rome on matters of doctrine, because the apostolic tradition has been handed down to us through the succession of Roman Pontiffs' [Note, this is at the end of the 2nd century ]. St. Irenaeus has been called the father of Catholic theology and the golden link joining the spirit of the Gospel to the doctrine of the Fathers. An eye-witness of those who had listed to the teaching of the Apostles, he was the first to write a rational exposition of our faith."
5 comments
Read more

Don't forget the Feast of St. Basil the Great. "They [the Arians...think Modernists] have the churches, but we [orthodox traditional Catholics not in union with the heretics] have the faith."

This account comes from Mark Fellows, Fatima in Twilight (Niagara Falls: Marmion Publications, 2003), pp. 48-49. "Lucy had been transferred to the Dorothean novitiate at Tuy, a town on the northernmost border of Portugal and Spain in 1926. Two years later she made her first vows. The following summer, Thursday, June 13, 1929...Lucy was observing a holy hour in the chapel. Sometime between 11pm and midnight she knelt prostrate by the communion rails [think here of how the Fake Sister Lucy received communion from John Paul II at Fatima in 2000), and repeated the prayers the Angel of Peace taught her. [Lucia] recalls: 'Suddenly the whole chapel was illumined by a supernatural light, and above the altar appeared a cross of light, reading to the ceiling. In a brighter light on the upper part of the cross, could be seen the face of a man and His body as far as the waist. Upon His breast was a dove of light. Nailed to the cross the body of another man. A little below the waist I coul
6 comments
Read more 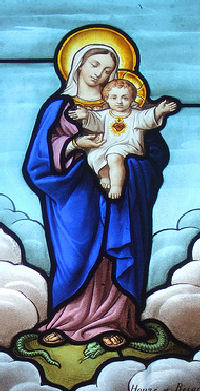 Here are some quotations with regard to this matter from the book, Possessed , Thomas B. Allen (New York: Doubleday, 1993), pp. 148-149. "To prepare Robbie for his first Communion....Robbie lay still on the bed when Bowdern [the exorcist] gave conditional absolution [the boy had not yet made his first confession]....Bowdern moved close, a particle of the Communion host in his outstretched right hand. One of the priests held the linen cloth called a purificatory at Robbie's chin. Robbie [the pseudonymous name of the possessed boy] became a whirlwind of failing arms and legs. Bowdern pressed closer and placed the particle in Robbie's mouth. He spat it out. A deft move of the purificator and the particle landed on the cloth. Bowdern picked it up and tried again. Once more Robbie spat it out and the purificator caught it. During the next two hours Bowdern tried twice more. Both times Robbie spat out the particle, which was caught on the purificator.  O'Flaherty [a parish p
1 comment
Read more

This is the only image I have of the Fake Sister Lucy with Cardinal Ratzinger. He met with her, had a picture taken to portray to the world that this was the real Sister Lucy. He knows that this is a fraud and that his portrayal of the Third Secret was also a complete fraud. Why don't these men ever come clean? Even when facing death and judgment?
14 comments
Read more 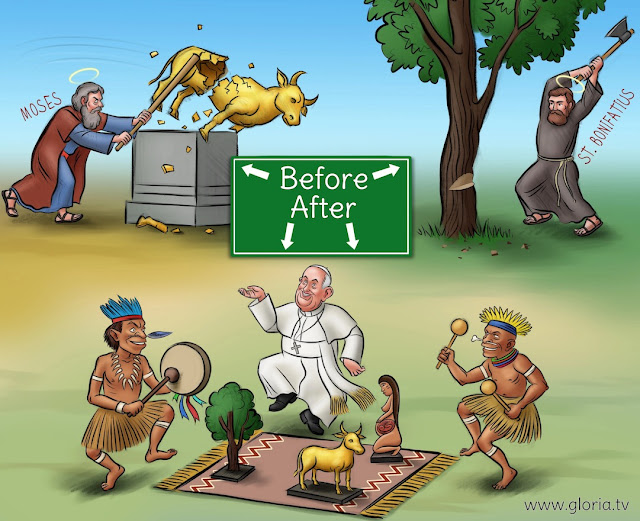 "Fatima Fraud-Our Case For An Imposter Lucy": The Vatican II Counterfeit Church Link to the Fake Sister Lucy is Clear and Obvious. Support us so that we find ALL the answers.

Kevin Symonds, the Carmelites of Coimbra, and the Vatican Continue to Present the Woman who is Clearly an Imposter as if She were the Real Sister Lucy. How about we just admit that John XXIII, Paul VI, and JPII were either hoodwinked (not likely) or they were the hoodwinkers? They have begun to fess up about the pedophilia, why not fess up about this tragedy? 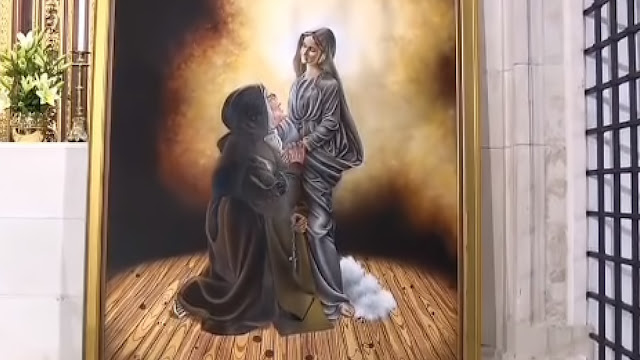 This is the new painting unveiled and "blessed" of "Sister Lucy" by the Carmel of Coimbra in their continued sinister cover-up of the greatest case of identity fraud in the history of the Catholic Church. Help us unveil the fraud and find out what happened. sisterlucytruth.org
5 comments
Read more

"Catholic Media and the Sister Lucy Case": The Simple Question Behind Sister Lucy Truth --- Is she or is she not? And how that question is being ignored.