Ok, Wolfgang. Let's Change the Trinity because the Lutheran Cobbler who saw a Light Beam Reflecting off a Pewter Bowl Said We Should. Right? 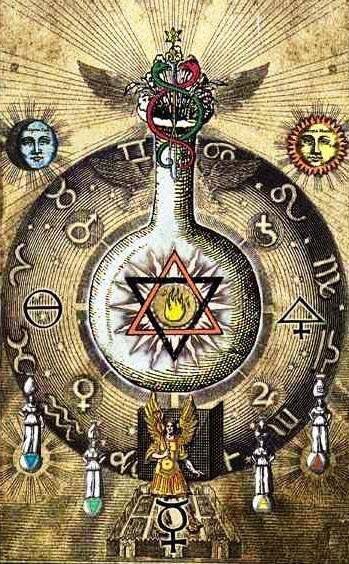 Dr. Chojnowski: Again we are brought to the infiltration of Neo-Manichean occult ideas and doctrines into the mental universe of traditional Catholics. We again can refer to the book of correspondence Dr. Wolfgang Smith exchanged with Fr. Malachi Martin back in the late 90s entitled, In Quest of Catholicity (Kettering, OH: Angelico Press, 2016), pp. 84-87.
In this section of the text, Smith opens his mind to Fr. Martin and indicates the difficulty which exists in trying to reconcile such doctrines as that of the Holy Trinity with the thought of the 17th century Lutheran German Cobbler --- who had a mystical experience --- Jakob Boehme. According to Smith, "Boehme does of course accept the idea of the Trinity --- as he accepts all Biblical data --- but his understanding or interpretation thereof differs sharply from the Catholic, which in fact it seems to contradict." Smith indicates that the big "difficulty" is that Boehme explicitly states that only the Son or Christ is a Person. The Father and the Holy Ghost NOT being Persons.
Rather than just say that Boehme is a heretic and should have rectified his "mystical"' experience based upon the dogmatic teaching of the Church, Smith indicates that since Boehme must be correct --- this is the simplicity but clear assumption throughout this section --- it is our understanding of what a "person" is that must be askew. At this juncture of his discussion, he jumps to a completely bizarre analogy that will probably fit in nicely with Boehme's Manichean view of the "Birth of God." In this regard, Smith compares the Father and the Son to the modern distinction between the "conscious" and the "subconscious." With this completely arbitrary and false analogy in play, he then infers that the Father and the Son cannot be "persons" in the same way. He then tries to justify his attempt to legitimize Boehme's completely unique and uniquely heretical idea by saying the St. Thomas Aquinas, "defines personhood abstractly in terms of 'relation."
According to my own theological understanding, it is not the personhood of the Father, the Son, and the Holy Ghost that is determined by their relation to the other Two Divine Persons, but the  "Fatherhood," the "Sonship," and the fact of being the spirated Holy Ghost that is determined by relation. That they are three Divine Persons in One Divine Being is the most basic Christian doctrine. Anyways, why are we reinterpreting what it means to be a Divine Person in order to make the doctrine conform to the mystical musing of our Lutheran cobbler. Cannot we peruse the Athanasian Creed? Or is that a bit too "exoteric"?
Now there is the move to wholly incorporate Boehme's teaching into Christian doctrine by making the distinction between two different "kinds" of heresies. There is the "intrinsic" kind and the "extrinsic" kind. In other words, heresies are not really heresies if they are part of the esoteric treasures reserved for the "purified." (p. 90).
To quote Dr. Smith's note #5 on page 90, "The higher knowledge benefits only the purified; for the un-reborn it is only a poison."
Here is part of the text of the Athanasian Creed --- for the Catholic "riffraff" of course:
Whoever wishes to be saved must, above all, keep the Catholic faith.
For unless a person keeps this faith whole and entire, he will undoubtedly be lost forever.
This is what the Catholic faith teaches: we worship one God in the Trinity and the Trinity in unity.
Neither confounding the Persons, nor dividing the substance.
For there is one person of the Father, another of the Son, another of the Holy Spirit.
In this Trinity, there is nothing before or after, nothing greater or less. The entire three Persons are coeternal and coequal with one another.
So that in all things, as is has been said above, the Unity is to be worshipped in Trinity and the Trinity in Unity.
He, therefore, who wishes to be saved, must believe thus about the Trinity.