A Single Signature Proves that both Sister Lucy II and the New Order that She heartily endorsed were both Frauds in a Substantial and Undeniable Way. 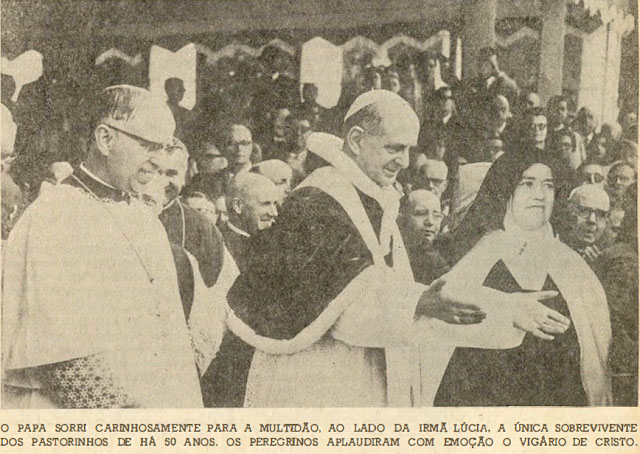 Letter from "Sister Lucy" from December 27, 1969, a month after the Novus Ordo Missae came into effect. 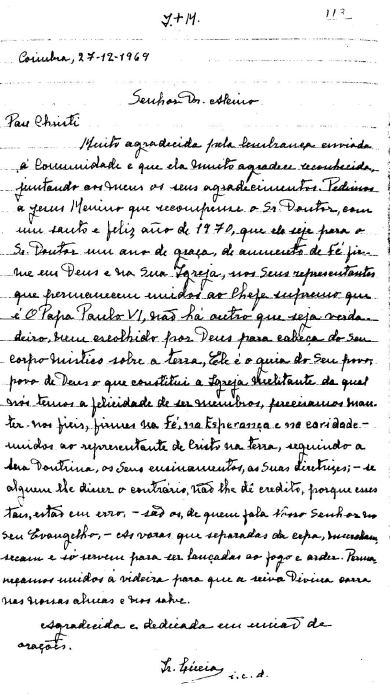 Link to translation of above text:

Refer to Baggett's expert analysis of the signature on the 1969 letter. In one of the comments on pp. 6-9 of the expert witness testimony, he says, "The 1969 signature in the questioned [1969] writing displays a rounded 'r' in 'Ir' which is a striking difference when compared to the known exemplars [writings of the 20's, 30s, 40s, and mid-50s]."

It is, also, interesting to hear what Baggett has to say about the "baseline" of the writing of Sister Lucy I and Sister Lucy II [p. 7]: "The baseline of the known handwriting of Maria Lucia [pre-1967] is incredibly straight, precise, and angular throughout the entire timeline. However, the questioned signatures [On 1967 and 1969 letters] are arcaded, rounded, and displays an unstable baseline. These are major differences."

It looks like both NewChurch and NewSister Lucy have been scientifically proven to be frauds by two signatures. Nice try, but you have been found out! Obviously, you would not falsify the signature and writing of "Sister Lucy" of Fatima if she would voluntarily endorse your NewSpringtime of the Church. No. You knew that she would have rejected it, including the Novus Ordo Mass, so you had to eliminate her and put in someone --- and,  perhaps, their ghost-writers, who would be completely supportive of the criminal enterprise which is the Novus Ordo. Stop denying science! 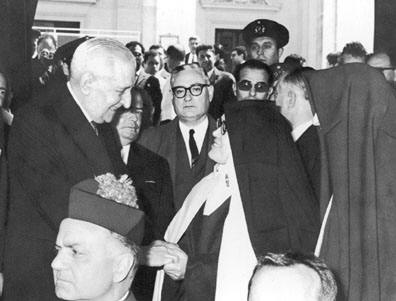 I have actually never seen this picture before. Must be from May13, 1967. Is this her meeting with Salazar? Or is it Salazar?This is clearly NOT  the real Sister Lucy, but it is clearly the woman that appeared with John Paul II in all of their meetings together. Notice the chin. Notice the strange handshake. Masonic? This picture genuinely creeps me out. Notice the strange man behind the elderly gentleman shaking "Sister Lucy's" hand. The focus of the mens' eyes in every part of the picture does not fit what is happening in the scene. It is a momentous meeting and, yet, no one seems interested.