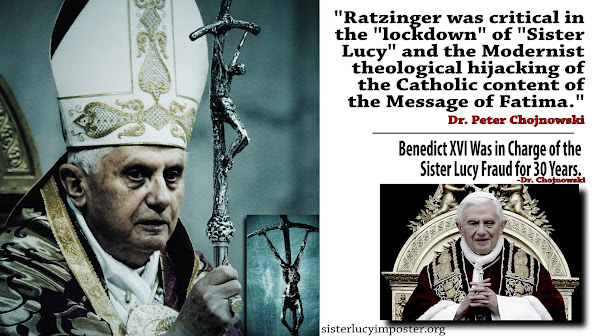 Dr. Chojnowski: "I too have been able to have a brief conversation with her".........and now I realize that it is not the authentic Sister Lucy at all but an imposter put in place in the years before I was prominent during the Vatican II Council....it is not my fault!!! ---- Unfortunately, nothing like this was said by Cardinal Ratzinger in 2000, during his interview with Peter Seewald. Instead, he presented the following lies, both about the Fatima Message and about "Sister Lucy":
"Indeed, the message itself is quite simple. And Lucia, the only surviving one of the children, has placed more and more emphasis on this simplicity and has said, Don't take any notice of all the other things you are told about [i.e., the Conversion of Russia, the reality of Hell, the fact that Our Lord is much offended by sin, "the apostasy in the Church will come from the very top," the First Saturday devotions to the Immaculate Heart of Mary to make reparation for what is the normal religious practice and attitude of Protestantism ---- or our "separated brethren," the Second World War was God's punishing the world for sin, etc.]; it's all just a matter of faith, hope, and love....[Lucia] said it with great emphasis: Tell people that!....I believe that all these appearances of Mary, so far as they are authentic, do not bring us something to set beside the gospel. They offer no satisfaction to people's curiosity [NOTHING TO SEE HERE!], no sensations or anything like that [Miracle of the Sun? Unnecessary really. I mean no use scaring people about their possible damnation and judgment.], but bring us back to the simple and essential things [in other words, why did she bother coming in the first place! All the bother. My predecessors in the Holy See had to organize the liquidation of the Seer.....oops! Was not supposed to say that.].
Dr. Chojnowski: If the Message of Fatima is so "simple," why did John XXIII not release the Third Secret when he opened it in 1959? Why was "Sister Lucy" only allowed to see those given permission to see "her" by the Vatican?
Conclusion: Cardinal Ratzinger and Fake Sister Lucy: Professional liars of the highest order.
See, sisterlucytruth.org