A Comment from a Reader on Fr. Escriva, Opus Dei, and the "silly nun" Sister Lucy of Fatima. "Silly" because Non-Cooperative, I bet. 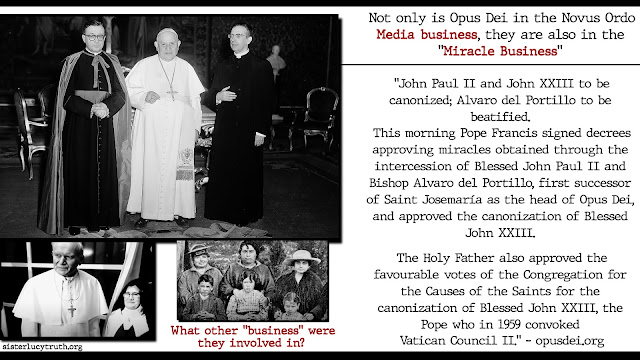 Read Escriva's ex opus dei secretary's book by Carmen Del Tapia. https://www.biblio.com/book/beyond-threshold-life-opus-dei-true/d/939504513?aid=frg&utm_source=google&utm_medium=product&utm_campaign=feed-details&gclid=EAIaIQobChMIk7yEvP3D6wIVE0WGCh3w8wNEEAQYASABEgLxwPD_BwE in which she recalls Escriva's trip to Tuy to speak with Sr Lucia, at the time a Dorothean nun which she was for 23 years. He refers to her ,according to Del Tapia, as a"....good but silly nun." Then read "Opus Dei in his Own Words", by Escriva. In that book Escriva writes, referring to the same visit with the ,"...good but silly nun", that it is she who tells him to open the first OD House outside of Spain in Coimbre ! It is she, he claims who offered to handle all the necessary papers and procure the documents !!! Interestingly this was right after Lucia suffered an influenza from which they thought she would die which is why it was requested she put the Third Secret to paper and have it delivered to her Bishop. But when asked if he discussed this with Lucia upon that visit, according to Del Tapia ,he replied ,"No". Not long after Lucia also shows up in Coimbre in a cloistered Carmelite convent...........Wow what a coincidence ! Del Tapia was Escriva's secretary for two decades. She saw him for what he was and her words are extremely credible.