Sister Lucia, Kissin' and a Huggin'? Read an Expert Translation of the 2000 Video Interview with "Sister Lucy." Who Needs Prayer and Penance When You Can Have Kissin and Huggin? 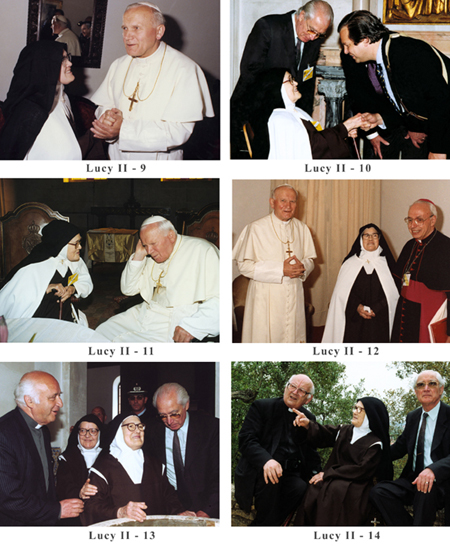 "But these days, everyone kisses everyone. Whenever I go out, everyone wants to kiss me. Men, women, men with moustaches. What can I do? There’s no way around it."

Update: Just a little section from the Wikipedia account of Sister Lucy of Fatima, specifically about her life in the Carmelite convent: Because of the Constitutions of the community, Lúcia was expected to "converse as little as possible with persons from without, even with their nearest relatives, unless their conversation be spiritual, and even then it should be very seldom and as brief as possible"[note 3] and "have nothing to do with worldly affairs, nor speak of them..."
https://en.wikipedia.org/wiki/Sister_Lúcia
Does this seem like this applies to the woman interviewed below?

Here is the video in the original Portuguese, with a translation from a native Portuguese expert below:
https://www.youtube.com/watch?v=GQf2IaPF9V4