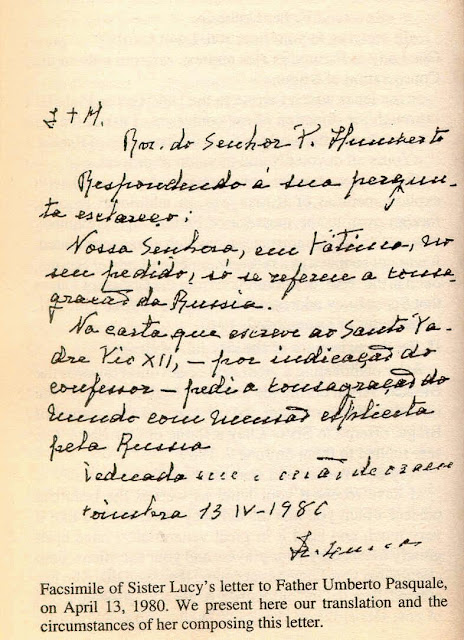 New and Revised Analysis Comparing Known and Excepted Handwriting Samples form Sister Lucy to the Letter Written in November of 1969, in which complete obedience to Paul VI's revolutionary actions in the Church is urged. Analyst certifies that the "Third Secret" (written in 1944) released by the Vatican IS consistent with the known Sister Lucy's handwritings, leaving open the possibility of a "Fourth Secret."
https://sisterlucyimposter.org/wp-content/uploads/2019/07/BaggettOpinionPacket-Extrc-Revised2.pdf

Sworn testimony and analysis of "Manuscript of Sister Lucy" which served as the basis, put forward as authentic by the Carmelites of Coimbra, for Sister Lucy's official biography. This cleverly done forgery was published by the Blue Army.
Scroll Down to Report #2
https://sisterlucyimposter.org/wp-content/uploads/2019/07/BaggettOpinionPacket-Extrc-Revised2.pdf

Signatures of Sister Lucy from the 1940s compared to those of documents in 1967 and 1969. Clever forgeries indicating that the Real Sister Lucy was gone from the scene by these years.
Scroll Down To Report #3
https://sisterlucyimposter.org/wp-content/uploads/2019/07/BaggettOpinionPacket-Extrc-Revised2.pdf

Contributions to the Sister Lucy Truth fund for further research and investigations, can be made at:
https://sisterlucyimposter.org/donate/