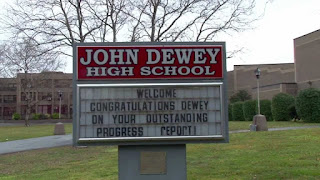 
To refute and, ultimately, counter-act the American Naturalism of John Dewey, we must deny and challenge his first principles, his arbitrary exclusions, his distortive portrayal of our philosophical tradition, and, finally, we must take seriously our own Catholic intellectual heritage so that the very process of education, dislodged and maligned by the likes of Dewey, will not be forgotten but will continue to cultivate the young minds which cry to their Creator, and subsequently to us, for their “rational milk.”