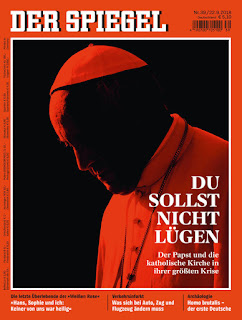 From the American Conservative,
paul-kalchik-persecuted-priest-chicago-cupich
Here is the most poignant part of the article. Spoken of below is the death of the sodomite "pastor" of "Resurrection parish" in Chicago. This material is not fit for children, but it is a necessary "picking up of the rock" of the Novus Ordo church. Here is the paragraph. Full article can be read by clicking the link above.
Here is a link to a 10-minute on-camera Church Militant interview with Father Paul Kalchik, the Chicago priest who is now in hiding after being tossed from his parish by Cardinal Blase Cupich. Kalchik lost his position after presiding over the burning of a rainbow flag that had a cross stitched on it. In the early 1990s, the gay pastor of Resurrection parish hung it over the altar as a sign that the parish was gay-friendly. After Kalchik and fellow parishioners ritually disposed of the flag recently, the cardinal ordered him removed from the parish, and allegedly commanded him to go to St. Luke’s, a mental health treatment center best known for treating clerical pederasts.
Kalchik fled — he says to avoid being arrested. In the final three minutes of the interview I link to above, Kalchik talks about the death of the gay pastor, Daniel Montalbano, who was found dead in his rectory bedroom of a heart attack in 1997. Kalchik says that three deacons saw Montalbano hooked up to some sort of “sex machine.” Montalbano had walls covered by mirrors. In cleaning out Montalbano’s room, deacons found two closets full of gay pornography — magazines, videos, and so forth. Kalchik says the deacons took them out to be burned, and were ordered by the Archdiocese never to speak of these things.

Here is another report in which Fr. Kalchik explains why he burned the Rainbow flag:
priest-who-burnt-gay-flag-gets-death-and-rape-threats-and-is-driven-from-his-church
Here are the words of Father Kalchik, explaining why he did what he did.

Meanwhile, the Archbishop who revealed that Anti-Pope Francis had covered up sexual abuse in the church has now gone into hiding in fear for his life.