Cardinal Cupich Removes Priest Who Supported Burning of Rainbow Flag by Parishioners To Center for "Pastoral Support." "Gay Pride" Flag had been HANGING OVER THE CRUCIFIX UNDER PREVIOUS PASTOR! Removed Pastor Was a Clerical Rape Survivor. 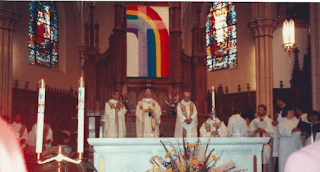 PJ Media:  A Catholic priest at Resurrection Parish in Chicago has angered Cardinal Cupich after he planned an event to burn an LGBTQ “pride” flag he found stashed away in his rectory.
A victim of sexual abuse himself, Father Paul John Kalchik announced his intention to burn the sacrilegious flag in protest on the parish website. “On Saturday, Sept. 29, the Feast of Ss. Michael, Gabriel and Raphael, we will burn, in front of church, the rainbow flag that was unfortunately hanging in our sanctuary during the ceremonial first Mass as Resurrection parish,” he wrote. The flag wasn’t just hung in the church but placed in front of the hand-carved crucifix from Germany on the altar.
While the hierarchy of the Catholic Church is notoriously slow to punish priests engaged in improper sexual behavior, the Chicago Archdiocese acted with urgency to cancel Fr. Kalchik’s event. After announcing his intention to burn the flag, Fr. Kalchik received a phone call from the Vicar for Priests Office, which is the disciplinary arm of the archdiocese. “It was a joint phone call with Fr. Dennis Lyle and Fr. Jeremy Thomas, who told me the cardinal had a message for me,” Kalchick told PJM.
“They said, ‘the cardinal wants you to know three things. First, you are not to burn the flag and if you do you should know there are canonical penalties for disobeying the cardinal. Second, you have put in a transfer request to move closer to your parents and that will not happen if you do this. Thirdly, the cardinal thinks you should get a psychological evaluation.” more …
Read Cardinal Cupich's Letter Below: