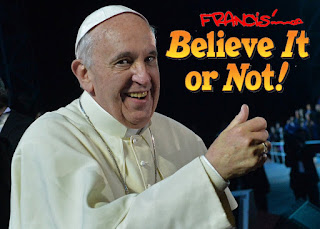 Here below is an exchange between Robert Siscoe and Fr. Francois Chazal over the question of what has been happening over the course of the last 60 years. From what we read, Mr. Siscoe acts as if the last 110 YEARS HAVE NOT HAPPENED. As if we are in the days of St. Pius X when we could merely say that the institutional Church was being infiltrated by hidden evil men. Such an analysis ---- along with allowing the Catholic Church to be filled with public apostates and heretics, totally ignores the fact that for almost 60 years we have had an endless stream of "official" deviations from the infallible and ancient faith of the Apostles and from (for example, with the new rite of episcopal consecration) even what had been definitively decreed only decades before by Pope Pius XII.

How many times do I need to put up the video of Archbishop Lefebvre saying that "Rome is in Apostasy"? How can the Church of Christ be the Pure Bride of Christ if MOST ALL  of Her members adhere to heresy and non-Catholic or anti-Catholic rites and practices and laws?

It would be interesting to ask Mr. Robert Siscoe the question, "Which are the parts of the institutional "Church" that are not corrupted in some way?" But the Church cannot be corrupted AT ALL, at least in Her teachings, practices, canon laws, canonizations, and universal magisterium. If She could be, who can tell us which parts are pure and which parts are not? Siscoe and Salza? This is rank Protestantism or Gallicanism.

Here is the exchange between Siscoe and Fr. Chazal:

Dear Father,
I had to leave town again for another business trip, and only recently returned.  I’m sure it’s too late to add any quotations to your book, but I thought I would send them anyway (will send in another e-mail).  Below are my replies to the points of disagreement you mentioned in the previous e-mail.  I’m not sure how much of an actual disagreement there is.  I guess we will find out when you read my replies.

Fr. Chazal : Yet I fear our disputations with sedevacantists are going to be all the more endless if:
1.We deny the emergence of a Newchurch. SVs go too far, et Novus Ordo est "Coetus disgregatus, nova doctrina, novis sacramentis sub nova notione auctoritatis". We cannot say that this newchurch is fully realised like the SV claim, but we cannot deny it is really emerging heterogeneously. P.59 you are afraid of us saying the Catholic Church is a new church, when in reality we can say that within the Official Church, growing parts are morphing into this cancerous newchuch. The crucial mistake of Bishop Fellay is to confuse the hijacked official church with the Catholic Church.

Reply by Siscoe to Fr. Chazal: How to explain the situation in the Church today is difficult.  Some have gone so far as to compare it to a mystery, but if we consider it in light of the traditional doctrine of the Church, I believe we can arrive at some certain conclusions. Let’s consider the two solutions proposed to explain the crisis.

Solution #1: One explanation is that the visible, institutional Church has become an entirely New Church – a false Church that one can have nothing to do with.  Some maintain that the entire hierarchy of this New Church is false, as is the Pope.  Others (Bishop Tissier) hold that the hierarchy is partly Catholic and partly not, and that the Pope is the head of two different Churches at the same time – the New Church and the Catholic Church.

Solution # 2: The second solution is that the visible, institutional Church has been infiltrated by her enemies (Freemasons, Communists and Satanists, etc.), who are destroying her from within, but who have not completely done so.  The visible institution itself remains the true Church, but it has been reduced to a state in which it is virtually unrecognizable, but without any of God’s promises being violated.  Just as Christ – the Head of the Church – permitted His enemies to seize Him, torture him and reduce him to a condition in which He was all but unrecognizable, so too has God permitted His enemies to do the same to the Church – at least nearly all of the Western Rite.