EU Revolts Against US Zionist Foreign Policy. Well at least we will still have Israel......and Australia as Our Voluntary Allies. The Geo-political Tectonic Plates Begin to Shift. 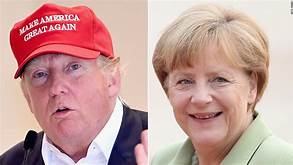 The Latest from Zero Hedge Pointing to the Deepening US and EU Divide. Apparently the United States is satisfied losing its European allies in order to go it alone with Israel. Of course, We still have the Federal Reserve, the CIA, and the Military/Security Complex to Impose the Will of the Neo-Conservatives. Also, the Australians seem content carrying the water of the Neo-Cons and Israel by voting against a condemnation of Israel's violence against the Palestinians.
Also, see the new video interview with Gerald Celente who Predicts a New War in the Middle East which will Crash the Meta-Leveraged Stock Market.

brussels-rises-revolt-against-washington-turning-point-us-european-relations
Brussels Rises In Revolt Against Washington: A Turning Point In US-European Relations

Authored by Alex Gorka via The Strategic Culture Foundation,
The May 16-17 EU-Western Balkans summit did address the problems of integration, but it was eclipsed by another issue. The meeting turned out to be a landmark event that will go down in history as the day Europe united to openly defy the US. The EU will neither review the Iran nuclear deal (JPCOA) nor join the sanctions against Tehran that have been reintroduced and even intensified by America. Washington’s unilateral withdrawal from the JPCOA was the last straw, forcing the collapse of Western unity. The Europeans found themselves up against a wall. There is no point in discussing further integration or any other matter if the EU cannot protect its own members. But now it can.

President Trump has his own reasons to shred the Iran deal, but he needs Europe to strong-arm Tehran into signing a “better” agreement. Were it to do so, the US administration would make it look like a big victory. Washington does not shy away from threatening its allies with punitive measures but the EU is standing tall, deepening the rift. As European Council President Donald Tusk put it, “With friends like Trump, who needs enemies?” According to him, the US president has “rid Europe of all illusions.” Mr. Tusk wants Europe to “stick to our guns” against new US policies. Jean-Claude Juncker, the head of the EU Commission, believes that “Europe must take America's place as global leader” because Washington has turned its back on its allies. Washington “no longer wants to cooperate.” It is turning away from friendly relations “with ferocity.” Mr. Juncker thinks the time is ripe for Europe “to replace the United States, which as an international actor has lost vigor.” It would have been unthinkable not long ago for a top EU official to say such things and challenge the US global leadership. Now the unthinkable has become reality.
The process of shifting away from America does not boil down to just words of indignation and open defiance. Plans are underway to take practical steps. For instance, the EU is to ditch the use of the US currency in its payments for Iranian oil. It can be done. Russia and Iran have already launched an oil-for-goods exchange program in order to leave the greenback behind. The bloc plans to activate a 1996 law (the blocking statute), which bans European businesses from compliance with US sanctions on Iran. The legislation protects "against the effects of the extra-territorial application of legislation adopted by a third country."
The EU-Iran discussions have already been held. And it is America’s closest ally who is to deal the first powerful blow against US global dominance. This is a demonstration of the “no retreat, no surrender” spirit before the not-yet-unleased war is in full swing.
True, this applies to only a relatively small sector of business activities, and Iran’s $400-billion market can’t be compared to the $18-trillion US market, but the important factor here is the show of political will to stand up to America’s challenge. This rift is taking place amid a looming trade war over aluminum and steel, the US withdrawal from the Paris climate accords, the relocation of the embassy to Jerusalem with no regard for the allies’ opinion, and the controversy over Europe’s NATO spending.
On May 15, the EU defense heads gathered at a meeting of the European Union Military Committee to discuss deeper integration and an independent defense policy, which envisages greater efficiency to reduce expenditures, given the US demands to increase those outlays under the auspices of NATO. The PESCO agreement is the backbone of the EU defense policy and it’s purely European.
Sandra Oudkirk, US Deputy Assistant Secretary of State for Energy, has just threatened to sanction the Europeans if they continue with the Nord Stream 2 pipeline project to bring gas in from Russia across the Baltic Sea. That country is also seen by the US as an adversary and its approach is by and large the same – to issue orders for Europe to adopt a confrontational policy, doing as it is told without asking too many questions.
Iran and Nord Stream 2 unite Moscow and Brussels in their opposition to this diktat. On May 17, Iran signed a provisional free-trade-zone agreement with a Russia-led Eurasian Economic Union (EEU) that seeks to increase the current levels of trade valued at $2.7 billion. The deal lowers or abolishes customs duties. It also establishes a three-year process for reaching a permanent trade agreement. If Iran becomes a member of the group, it would expand its economic horizons beyond the Middle Eastern region. So, Europe and Russia are in the same boat, both holding talks with Iran on economic cooperation.
President Donald Trump has just instructed Secretary of State Mike Pompeo to prepare a list of new sanctions against the Russian Federation for its alleged violations of the 1987 Intermediate-Range Nuclear Forces (INF) Treaty. This is the agreement the US has so egregiously and openly breached. But nobody in Europe has announced that they want US nuclear-tipped intermediate- range weapons on their territory that will be a target for a potential retaliatory strike by Russia. It’s an example of yet another European problem with having the decision-making process located in Washington.
If Europe is resolved to fend off US attempts to dictate its policy on Iran, why should it reconcile itself to the pressure to keep the sanctions against Russia intact? May 17 marked a turning point in the US-European relationship. Europeans joined ranks to resist a policy that encroaches on their right to decide their own fate. It’s Europe, not the US, who is negatively affected by the punitive measures, creating deep divisions within the EU at a time when that group is faced with many problems. The time is ripe for Brussels to stop this sanctions-counter-sanctions mayhem and stake out its own independent policies on Russia, Iran, defense, and other issues, that will protect European, not US, national interests. May 17 is the day the revolt started and there is no going back. Europe has said goodbye to trans-Atlantic unity. It looks like it has had enough.