Well, at Least the Last 30 years has Cleared Up THAT Problem! Now the "antichrist" occupying the Throne of Peter is a "saint" and a Touchstone of "Catholic Moral Teaching" ---- a teaching, by the way, that he wanted to reform based upon the value theory of Max Scheler, an Apostate. 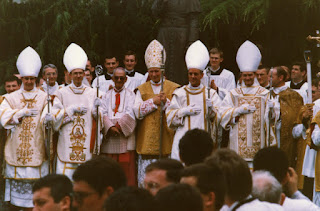 Letter to the future Bishops

Adveniat Regnum Tuum
My dear friends,
The See of Peter and the posts of authority in Rome being occupied by anti-Christs, the destruction of the Kingdom of Our Lord is being rapidly carried out even within His Mystical Body here below, especially through the corruption of the Holy Mass which is both the splendid expression of the triumph of Our Lord on the Cross - Regnavit a Ligno Deus - and the source of the extension of His kingdom over souls and over societies. Hence the absolute need appears obvious of ensuring the permanency and continuation of the adorable Sacrifice of Our Lord in order that "His Kingdom come." The corruption of the Holy Mass has brought the corruption of the priesthood and the universal decadence of Faith in the divinity of Our Lord Jesus Christ.
God raised up the Priestly Society of St. Pius X for the maintenance and perpetuity of His glorious and expiatory Sacrifice within the Church. He chose Himself some true priests instructed in and convinced of these divine mysteries. God bestowed upon me the grace to prepare these Levites and to confer upon them the grace of the priesthood for the continuation of the true Sacrifice according to the definition of the Council of Trent.
This is what has brought down upon our heads persecution by the Rome of the anti-Christs. Since this Rome, Modernist and Liberal, is carrying on its work of destruction of the Kingdom of Our Lord, as Assisi and the confirmation of the Liberal theses of Vatican II on Religious Liberty prove, I find myself constrained by Divine Providence to pass on the grace of the Catholic episcopacy which I received, in order that the Church and the Catholic priesthood continue to subsist for the glory of God and for the salvation of souls.
That is why, convinced that I am only carrying out the holy will of Our Lord, I am writing this letter to ask you to agree to receive the grace of the Catholic episcopacy, just as I have already conferred it on other priests in other circumstances. I will bestow this grace upon you, confident that without too long a delay the See of Peter will be occupied by a successor of Peter who is perfectly Catholic, and into whose hands you will be able to put back the grace of your episcopacy so that he may confirm it.
The main purpose of my passing on the episcopacy is that the grace of priestly orders be continued, for the true Sacrifice of the Mass to be continued, and that the grace of the Sacrament of Confirmation be bestowed upon children and upon the faithful who will ask you for it.
I beseech you to remain attached to the See of Peter, to the Roman Church, Mother and Mistress of all Churches, in the integral Catholic Faith, expressed in the various creeds of our Catholic Faith, in the Catechism of the Council of Trent, in conformity with what you were taught in your seminary. Remain faithful in the handing down of this Faith so that the Kingdom of Our Lord may come.
Finally, I beseech you to remain attached to the Priestly Society of St. Pius X, to remain profoundly united amongst yourselves, in submission to the Society's Superior General, in the Catholic Faith of all time, remembering the words of St. Paul to the Galatians (1:8-9): "But even if we or an angel from heaven were to teach you a different gospel from the one we have taught you, let him be anathema."
As we have said before, now again I say: "if anyone teaches you a different gospel from what you have received, let him be anathema." My dear friends, be my consolation in Christ Jesus, remain strong in the Faith, faithful to the true Sacrifice of the Mass, to the true and holy priesthood of Our Lord for the triumph and glory of Jesus in heaven and upon earth, for the salvation of souls, for the salvation of my own soul.
In the hearts of Jesus and Mary I embrace you and bless you. Your father in Christ Jesus,
+ Marcel Lefebvre
On the Feast os Saint Augustin, August 29, 1987