The Relationship between John Paul II, Cardinal Sodano, Josef Ratzinger, and Opus Dei: CAN THOSE INVOLVED IN THE PRESENT CHURCH CONSPIRACY NOT IN Opus Dei, PLEASE RAISE YOUR HANDS! 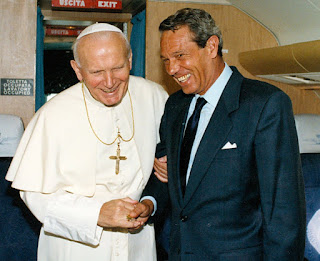 DR. CHOJNOWSKI: IF YOU CAN FORGIVE THIS MARXIST SPANISH PROFESSOR HIS IDEOLOGICAL TENDENCY TO CALL EVERYTHING HE DOES NOT LIKE "FASCIST," WHAT IS STRIKING IS THE CONNECTIONS Opus Dei HAS TO BASICALLY EVERYTHING THAT WE HAVE BEEN CONSIDERING WITH REGARD TO THE SISTER LUCY CASE, THE THIRD SECRET, THE POST-CONCILIAR PAPACY, CHRISTENDOM COLLEGE, ETC. IT HAS BEEN READERS LETTERS AND NOTES THAT HAVE PUSHED US IN THIS DIRECTION. I KNEW, FROM THE EARLY 90S, WHEN Opus Dei WAS TRYING TO RECRUIT ME, THAT THEY WERE DEVOTED TO EVERYTHING ABOUT JOHN PAUL II --- EVEN HIS PHENOMENOLOGY AND HUMANISM. WHAT THE AUTHOR IS IDEOLOGICALLY BLINDED TO IS THAT Opus Dei WAS "CHRISTIAN DEMOCRAT" IN POLITICS AND PROFOUNDLY "LIBERAL" IN MATTERS OF ECONOMICS. IT WAS IN THIS WAY THAT THEY TRIED TO OVERTURN THE FRANCO REGIME BY INFILTRATING IT THROUGH ITS ECONOMIC POLICY SINCE THEY KNEW THEY COULD NOT GET RID OF FRANCO DIRECTLY. THEY WERE SUPPORTERS OF LIBERAL CAPITALISM, CHRISTIAN DEMOCRACY, AND THE "DEMOCRACY" MOVEMENTS IN THE POST-SOVIET EUROPE. NOTICE THE SLIGHT REFERENCE TO THEIR RELATIONSHIP WITH CIA DIRECTOR BILL CASEY. SO IF YOU CAN STOMACH THE LEFTISM --- REMEMBER, A STOPPED CLOCK IS RIGHT TWICE A DAY --- THE AUTHOR DRAWS SOME VERY INTERESTING CONNECTIONS WHCIH SHOULD BE FOLLOWED UP TO MAKE OUR PRESENT SITUATION CLEAR.