Rome Report: The 50,000th Admonition to a NewPope Is Issued by Roman Conference "Catholic Church, where are you going?" SO NOW WHAT? 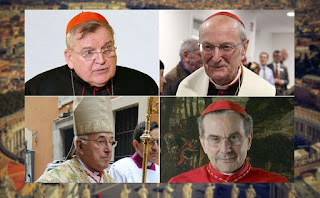 According to some, these are the only men on the face of the earth who can say, HERETIC! I guess all that Baptism, Confirmation stuff was for nothing, no? By the way, were does it say that ANYWHERE?
THANK YOU, MAIKE HICKSON FOR THIS LATEST REPORT AND ANNOUNCEMENT FROM ROME:
herefore we testify and confess…”

Final declaration of the conference “Catholic Church, where are you going?”
Rome, April 7, 2018

Due to contradictory interpretations of the Apostolic Exhortation “Amoris laetitia,” discontent and confusion are spreading among the faithful throughout the world.
The urgent request for a clarification submitted to the Holy Father by approximately one million faithful, more than 250 scholars and several cardinals, has received no response.
Amidst the grave danger to the faith and unity of the Church that has arisen, we baptized and confirmed members of the People of God are called to reaffirm our Catholic faith.
The Second Vatican Council authorizes us and encourages us to do so, stating in “Lumen Gentium,” n. 33: “Thus every layman, in virtue of the very gifts bestowed upon him, is at the same time a witness and a living instrument of the mission of the Church itself ‘according to the measure of Christ’s bestowal’ (Eph. 4:7).”
Blessed John Henry Newman also encourages us to do so. In his prophetic essay “On Consulting the Faithful in Matters of Doctrine” (1859), he spoke of the importance of the laity bearing witness to the faith.
Therefore, in accordance with the authentic tradition of the Church, we testify and confess that:

1) A ratified and consummated marriage between two baptized persons can be dissolved only by death.
2) Therefore, Christians united by a valid marriage who join themselves to another person while their spouse is still alive commit the grave sin of adultery.
3) We are convinced that this is an absolute moral commandment which obliges always and without exception.
4) We are also convinced that no subjective judgment of conscience can make an intrinsically evil act good and licit.
5) We are convinced that judgment about the possibility of administering sacramental absolution is not based on the imputability of the sin committed, but on the penitent’s intention to abandon a way of life that is contrary to the divine commandments.
6) We are convinced that persons who are divorced and civilly remarried, and who are unwilling to live in continence, are living in a situation that is objectively contrary to the law of God, and therefore cannot receive Eucharistic Communion.

Our Lord Jesus Christ says: “If you continue in my word, you are truly my disciples, and you will know the truth, and the truth will make you free” (Jn 8: 31-32).
With this confidence we confess our faith before the supreme pastor and teacher of the Church together with the bishops, and we ask them to confirm us in the faith.